On Jan. 14, 2017, we took the ICW from our anchorage in Mile Hammock Bay to a mooring ball in Carolina Beach, NC. It was an intense and draining day due to bridge schedules and a combination of tide state and shoaling.

We had to pass through three bridges with restricted openings (either on the hour or on the hour and half hour). Normally we can time how fast we need to go and arrive at the bridges shortly before they open; the alternative is to circle in the channel before the bridge, and that can be very hairy. But we were passing through an area that was pocked with tiny inlets and bays and all manner of islands, and it played havoc with the current. This meant that we would be going 4 knots, then suddenly shoot up to 7 knots, then drop to 3 knots, etc. It destroyed our ability to time the bridges, so we simply hauled butt as fast as we could to each one and then had to circle. Definitely not a pleasant way to do it.

At the last part of the day the Shoaling Hell began. We hit a notorious area in the Masonboro Sound at low tide (actually low tide on a spring tide, which is even worse), and we were routinely seeing depths of 6-8 feet in the middle of the channel. Loaded with water and fuel as we are, we draw 5 feet, which meant that any little lump or debris on the bottom of the channel suddenly became a major concern.

It felt like it took us hours to get through about a 16 mile stretch of this. We “chuffed” the bottom twice and bumped it once but otherwise made it through (physically) unscathed. My rear end was gritted so tight through there that I was sure I was raising the boat out of the water by at least a few inches.

We were going to anchor in Carolina Beach but after a day like that, we decided to just grab a $20 mooring ball. Best decision ever! 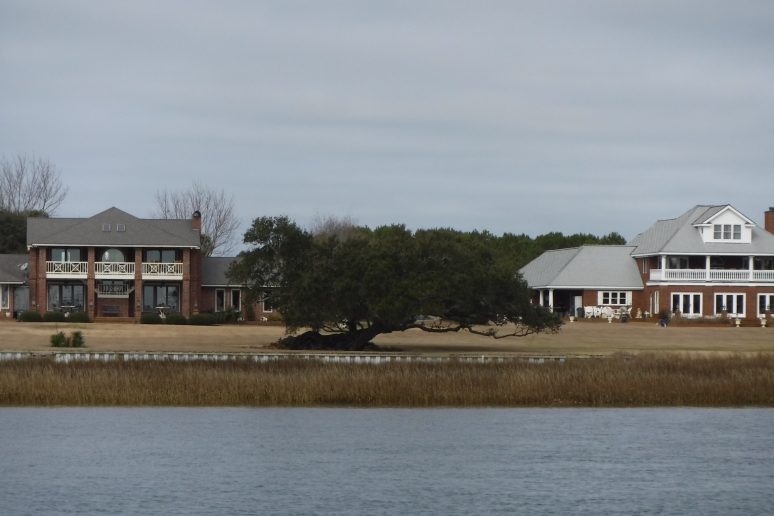 Now that’s a tree that has seen some wind.

Our chart indicated that a DR (dead reckoning) reference would be “Giraffe.”  We couldn’t begin to think what that meant.  When we came around a bend, there he was.  Doesn’t everyone want a giant giraffe statute in their back yard?