Since we were at a marina and weren’t leaving until mid-morning in order to time the tide, we spent the morning taking advantage of marina life:  dumping every scrap of trash, cleaning the hull (at least on one side), rinsing salt off the boat, vacuuming below with the Shop Vac, filling our water tank and water jerry jugs, and charging all of our electronics.  The evening we arrived we had also filled our diesel tank plus all four diesel jerry jugs.

Beach Marine lived up to its name as we left.  We left at one hour before low tide, and as we went through the marina’s entrance channel, we were seeing depths as low as 4’7”.  We draw 4’6”, but fully loaded with diesel and water as we are, it’s probably more like 5’.  We grounded and plowed through mud; at cruising RPMs of 2750 or so we were only inching along.  We finally broke free after about 50 feet and skedaddled.

Almost immediately we went under the BB McCormick Bridge and found a fierce current against us.  We battled our way through that, and after that, we were ready for an easy day on the ICW.  We got it, much to our delight.  The weather was clear, sunny, and in the mid-70s with a crisp breeze, and we were virtually the only boat out on the water (not counting little fishing boats and motorboats).

Most of this stretch of the ICW is through essentially a canal.  One side is lined with homes as far as the eye can see, and the other side is a wild and tangled marshy and swampy area.  We really enjoyed looking at all of the different styles of houses.  We putted along relatively slowly as we were trying to arrive in St. Augustine at slack water. 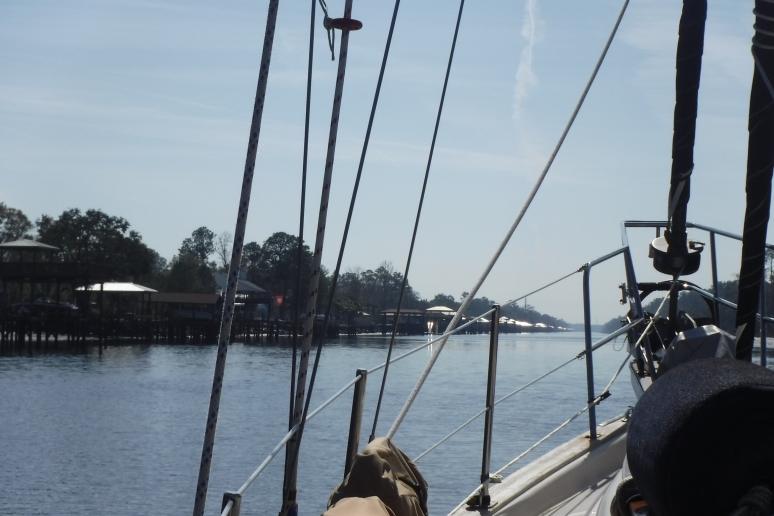 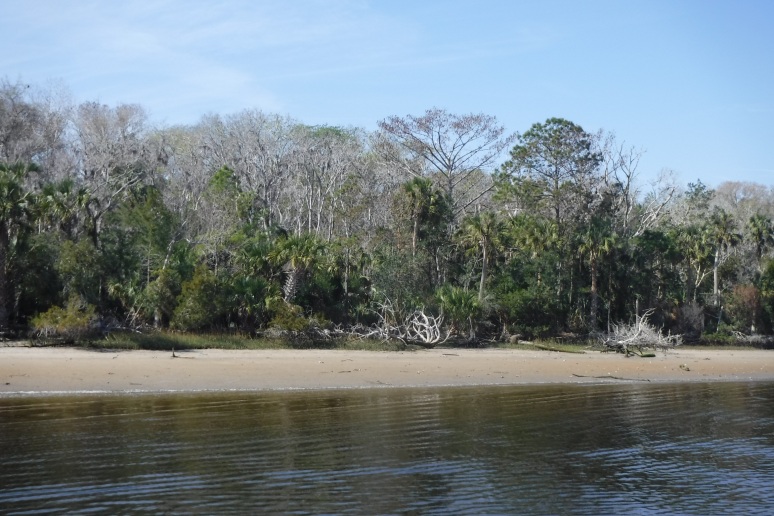 The view to starboard:  where the wild things are.

We did have to call the Coast Guard to report a hazard to navigation that The Captain spotted.  Two pilings or telephone poles were floating partially submerged, so we called it in to the USCG Sector Jacksonville.  It was kind of neat to hear a Securite call go out on channel 16 with the information.

We arrived in St. Augustine just when we planned and at slack water.  The current here is wicked, and it’s prudent to take that into account.  Those that don’t can really regret it.  We had previously made a reservation for a mooring in the mooring field run by the St. Augustine Municipal Marina.  There is a field north of the Bridge of Lions bascule bridge and a field south of it.  You don’t receive your mooring assigning until you arrive, so we didn’t know if we’d have to time the bridge.  We were assigned to the south field, so we had to circle for about a half hour to wait for the bridge opening. 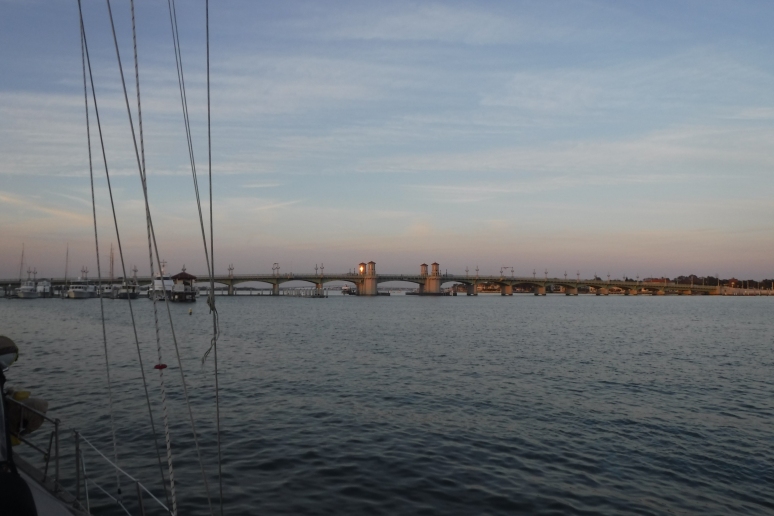 The Bridge of Lions bascule bridge from the south field.

We slid right up to the mooring ball and caught it with ease.  Some of this is practice, but most of it was the calm state of the water.  Since then we’ve heard lots of yelling and fussing between crew when people are trying to catch the ball and fight the current simultaneously.

We really lucked out on the mooring assignment.  We are very close to the marina office (which means strong wifi) and the dinghy dock (which means not getting too wet because we don’t have a very long ride).  There are 110 mooring balls, so the field is huge.  It’s $25 per night including tax and includes a decent swipecard shower facility (2 stalls), laundry (4 washers and dryers), a small lounge, free wifi, and a free launch that runs at 10AM, 12PM, 2PM, 4PM, and 6PM.  They also sell fuel, but we don’t need any.  The ship’s store can accept mail, and we’ve already had packages and mail sent to us.  The dinghy dock is large and can accommodate many boats.

We plan on staying a few days to tour this historic city before moving southward again.  This trip was 7 hours for 27.7nm (31.9 statute miles). 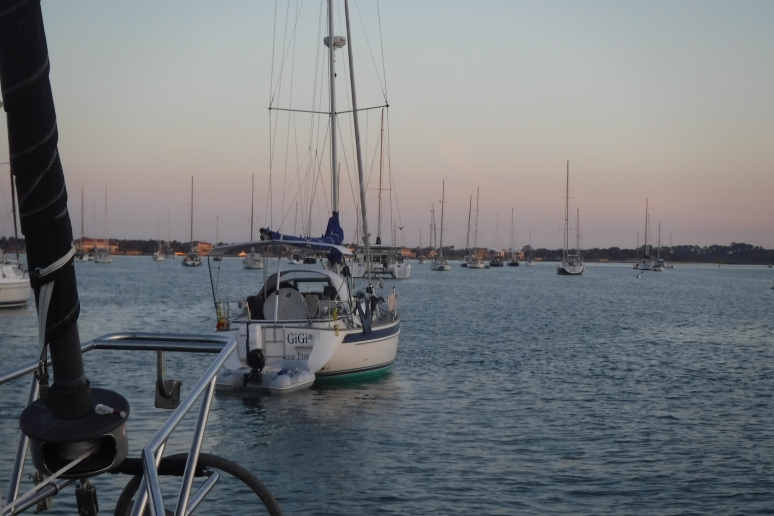 The south field stretching off into the distance.