First, we had a gorgeous two-day offshore weather window which would be followed by storms at gale strength the next day.  We figured we’d end up trapped on anchor in Lake Worth for days, which is generally considered a utilitarian place at best.  (As I write this the day after we arrived, the gale is blowing full force.  We are snug and dry in the boat, hobbyhorsing like mad on the mooring ball.)

Second, we are sick to death of the ICW and its bridges.  From Vero Beach to Coconut Grove there are 45 bridges, 37 of which are restricted opening bascules (e.g. depending on the bridge, they open on demand or on the hour/half hour or on the quarter hour/three-quarter hour).  Oh HELL no.  The First Mate rarely puts her foot down about navigation options, but I did this time.

We ended up doing a day-before, late-night revision of our entire route to Dinner Key.  We left Vero Beach and took the ICW down to Ft. Pierce, which was about 13 miles.  We then went offshore from the Ft. Pierce inlet.  That inlet is wide and well-marked, but the water is squirrelly and confused.  Fortunately there wasn’t a lot of traffic going in or out at that point.

We sailed a lovely beam reach or broad reach almost all day.  The seas were 3-4 feet with about an 8 second period, the winds were 5-10 gusting to the mid-teens, and the sun was shining.  We sailed with the main and genoa all day.    During the day we stayed about 3 miles off the coast, comfortably sandwiched between the Gulf Stream and land. 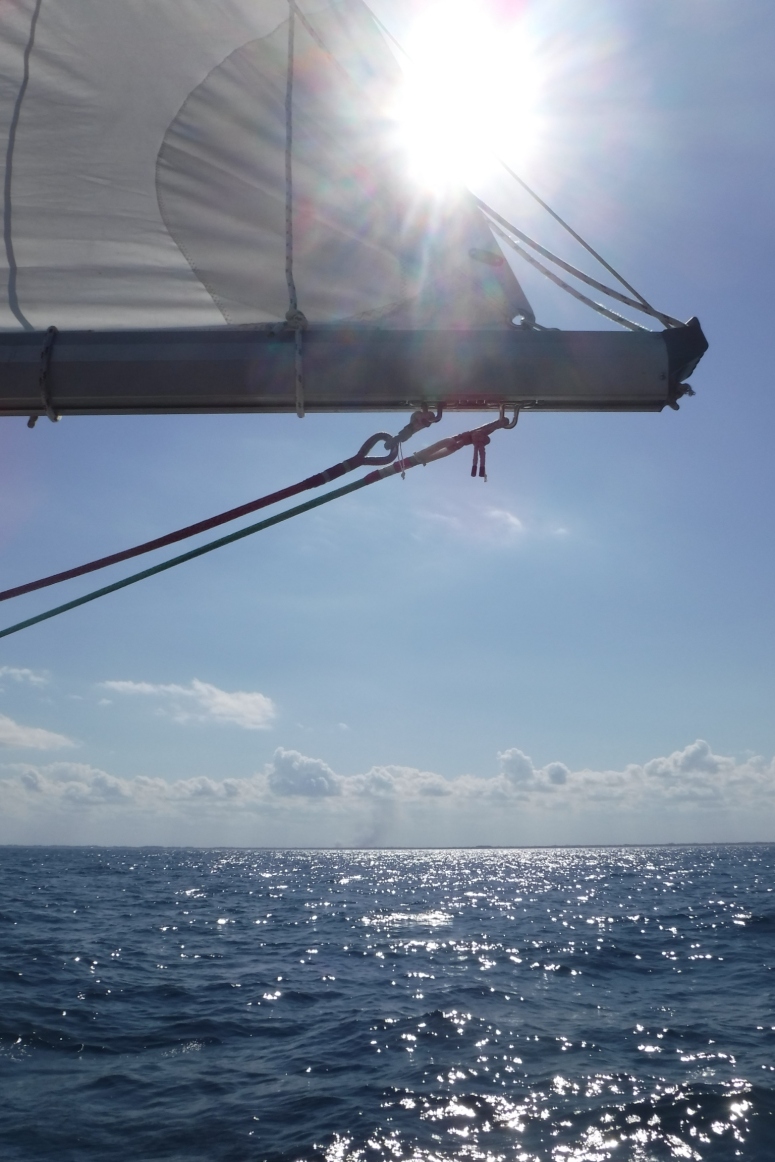 We didn’t see any dolphins, but I saw a group (flock? school?) of flying fish for the first time.  They exploded out of one wave, flew for about 20 feet, and then dove back into another wave.  We also saw the neatest pint-sized jellyfish; it has a bladder on its back that it fills with air.  The bladder sticks up out of the water like a little sail, and the wind pushes the jellyfish through the water.  They were so cute, just bobbing along.

As it got dark, conditions started getting weird.  We’ve discovered a rule on offshore passages: wind, swells, and current will unexpectedly change as soon as you are sleepy, functionally blind, and weary from constant hand-steering and sheet-handling. 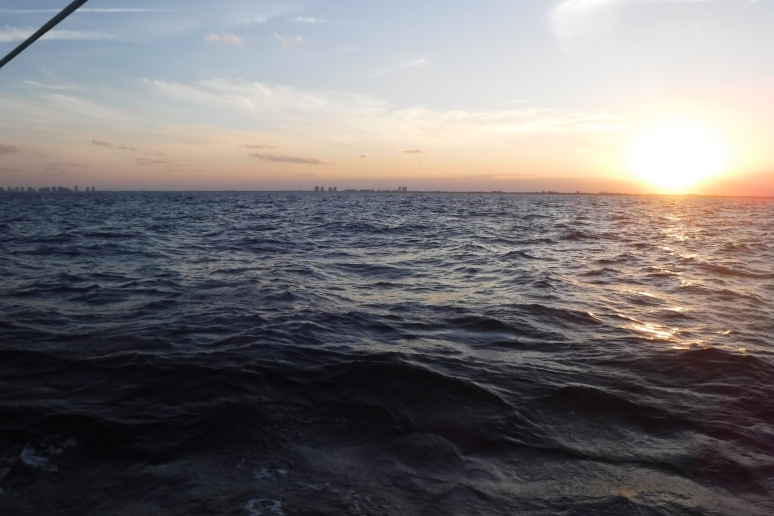 Our speed started to drop  even though the wind speed hadn’t changed.  Given that and the consistency of the deceleration, we felt it was due to a foul current (a current against us).  The Gulf Stream was forecast to be approximately eight miles offshore, and we were only three miles offshore.  We slowed down to 1-2 knots at some points.

We did some experimenting with sail plans and compass headings to no avail.  In the event that we were feeling the effects of the Gulf Stream, The Captain decided to move to about a mile away from shore, and this seemed to lessen the current’s effect.  We still had to watch out for the danger of the lee shore (e.g. the wind pushing us towards land).  However, Palm Beach and Ft. Lauderdale were so brightly lit that we could see the water and our surroundings easily despite the fact that we only had a sliver of a moon.  One thing we didn’t have to worry about was depth; we had 450 feet of depth at three miles out and still over a hundred feet of depth a mile from shore.

Setting sun reflected on the water makes it look like liquid nitrogen.

We already had the mainsail on a preventer to force it outward and keep the boom from braining us should we accidentally jibe.  Eventually the wind started to build so much that we were overpowered with a full genoa, so we put two reefs in the genoa but left the main fully up.  The swells went from 2-3 feet to 4-5 feet, and we were doing some real surfing.  Night sailing is an incredible feeling; the immense power of the ocean is so immediate and easier to feel when your sight is reduced by nightfall.

As the sun rose, visibility increased and we could scoot a little closer to shore.  We got out of the effects of the foul current and resumed truckin’ at 5-6 knots.  We shook out the reefs in the genoa and made great time.    The Miami boat show had recently wrapped up, so as we got closer to Miami, we saw a parade of high-end motorboats heading northward.  Fortunately they were far enough away not to swamp us with wake every time they went past.

When you read tales of offshore passages from serious mariners, there’s always a mention of clearing dead flying fish off the deck in the morning.  I found one little dead guy on the deck when the sun came up, so I guess we are now in illustrious company.

Coming into Miami was insane.  There were container ships, barges, megayachts, ferries, Sea Tow boats, Coast Guard boats, sport fishers, trawlers, and small zippy boats all over the place. Oh, and the bane of my existence:  jet skis.

As we entered Government Cut (and were thus trapped in small water), a bascule bridge in Miami opened.  We had heard earlier on the radio that 34 boats were waiting to get through.  People were shouting at each other on the radio to move closer to the bridge.  Once the bridge opened, a flood of pissed-off and impatient motorboats came screaming our way, throwing up wakes that rivaled any wave we’ve encountered offshore.    People were cussing each other on Channel 16, including using the f-word.  There were entire conversations occurring on 16, which normally earns a stern rebuke from the Coast Guard.  I told The Captain that this reminded me of going through the East River in NYC, and he tersely responded that this was worse because the water is so shallow.  Also, the boat traffic in the East River was almost exclusively helmed by professionals, unlike the testosterone-fueled maniacs we saw here.

We dodged some of the huge ship traffic by taking Fisherman’s Cut out to Biscayne Bay.  We arrived at the Dinner Key Mooring Facility and thankfully grabbed a mooring ball.  They are $25/night and include access to heads/showers, laundry, trash, free wifi (although we can’t pick it up), and a launch that runs on the hour.