We left Key West on March 14 bound for Marathon.  It was an amazing, incredible day of sailing.  We motorsailed with one reef in the main and the staysail for about 3 ½ hours and then made a sail change; we furled the staysail and rolled out the genoa to the first reef mark.  We turned off the engine, and baby, we flew.  The winds were on the port beam pretty much all day, blowing 14-18 knots and gusting to 22 knots. The solar panel and wind generator kept up with our power needs, even with the radio, GPS, chart plotter, AIS, and autopilot all running.

We sailed with that plan all of the way to Marathon and anchored in the outside anchorage where we were just a few days earlier.  The winds kept up all night, and we ended up sleeping in the salon rather than deal with the bouncing V berth.

On March 15, the winds continued to blow above 20 knots all day, so we spent a quiet day on the boat.

Burdine’s is our kind of place:  kind of grungy, no pretensions, but good quality food, fuel, and water.  The restaurant is called the Chiki Tiki and is upstairs from the fuel dock.  We sat at the bar (highly recommended for the entertainment value) and had sandwiches and a basket of fries that almost made me cry it was so good.  We have two favorite exchanges that we overheard:

Patron:  What wines do you have?

Patron:  I’d like two scotch and waters (aside:  we started giggling at this point, knowing what was coming, and also it was 11:30 IN THE MORNING).

Bartender:  Beer and wine only.  Here’s a beer list (hands her a menu and walks away—patron looks nonplussed).

This is Eddie, a/k/a Mooch.  He steals from the shrimp bait tanks at Burdine’s, but no one really seems terribly put out about it.

On March 17, we dinghied back over to Burdine’s and caught a Bob Narly taxi.  Bob Narly’s charges a $5 flat rate anywhere in Marathon, bridge to bridge, regardless of how many people you can cram in the car.  It’s a steal.  So we took it to Publix and did a massive provisioning run.  We got all the huge stuff I don’t like to (or can’t) carry when I’m walking:  case of water, case of beer, three cases of soda, packs of Gatorade, lots of dairy products, and then some vegetables.  Loading it all in the dinghy took some serious strategizing, and we babied the dinghy going back to the boat as it was about as responsive as an aircraft carrier with all that weight.

March 18 was laundry day.  We dinghied over to Burdine’s (shocker there) and walked 10 minutes over to the Marathon Laundromat.

I wouldn’t normally rave about a laundromat, but I have found Laundry Nirvana.  I have been to laundromats up and down the east coast, and without exception, they range from dirty and unkempt to downright disgusting.  The Marathon Laundromat is a retro-style building that is absolutely SPOTLESS.  It has tons of clean chairs, folding tables, laundry carts, and machines.  They are a little pricey (three sizes of washer that run $5, $5, or $6 per load), but I was happy to pay it.  And to top it off, there was cool art on the walls, smoking fast free wifi, and a puppy named Chloe.  Seriously? And I learned from the incredibly helpful staffer, Brian, that the laundromat is owned by the same people that own the Cool Guy Stuff shop I mentioned a couple of posts ago. 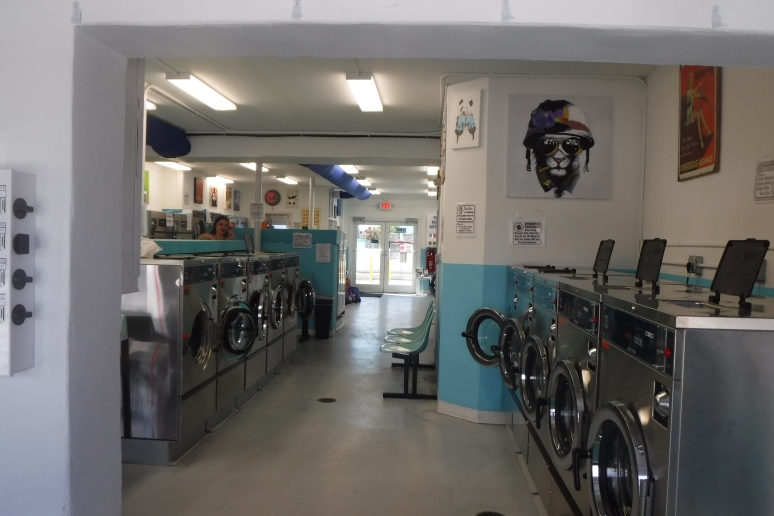 As a treat, we got cortaditos at La Ninas, which had become our favorite little Cuban food stand.  It is at the head of the Trailerama trailer park and has very good coffee. 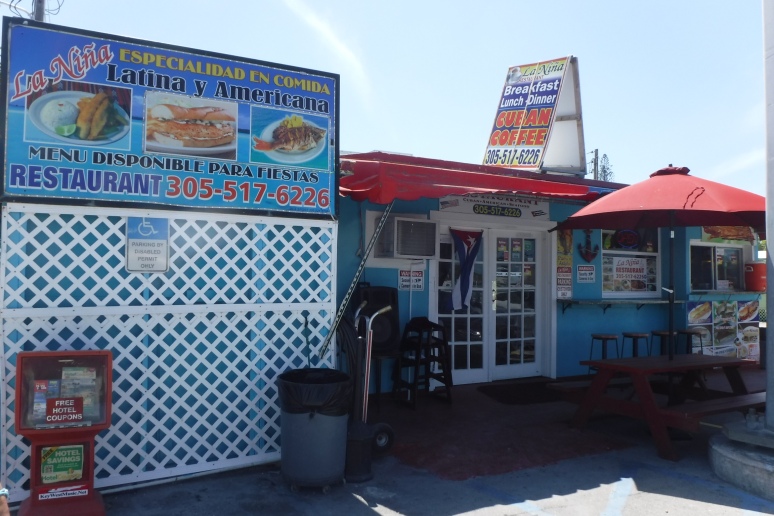 When laundry was done and put away, we got 39 gallons of water in our jerry jugs at Burdine’s and filled up the boat’s tank.  We took a dinghy ride our Sisters Creek and over to Sombrero Beach, where the water was astonishingly clear.

I have a thing for crazy dinghies.  Here’s one we saw in the Marathon Mooring Field.  I like the chair.  Here’s a man (or woman) who likes their comfort.

The next day we left headed north bound for Rodriguez Key and then Key Biscayne.