We left Vero Beach on April 7, 2017, and had an uneventful day motoring up the ICW to an anchorage in Melbourne, FL.  We have been travelling offshore for so long now that we had to get used to the ICW again.  There is a consistent stream of northbound traffic, and the VHF radio is alive with constant chatter between boats. 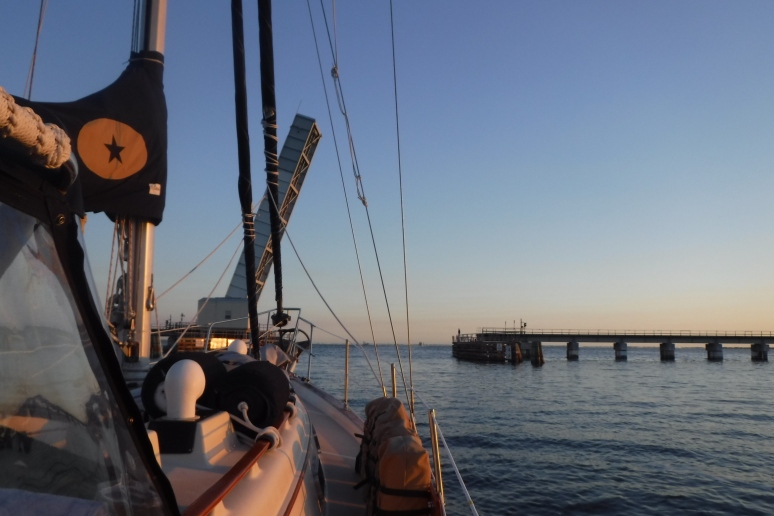 Ahh yes, back to the ICW bridges.

It was sunny but in the mid- to high 60’s, and I ended up putting on a hat and gloves to keep warm.  The breeze off the water can really chill you after a few hours, and I’d rather just avoid getting cold altogether.  The wind was blowing 15+ knots on the nose (of course), and we were taking quite a bit of misty spray.  We had an opposing current until we made it through the Sebastian Inlet area; once through there, our speed picked up.

We anchored just north of Melbourne Bridge in 10.4 feet of water.  We had anchored in this spot on the way south and really liked it.  There are a number of crab pots to dodge, but other than that, it’s a nice anchorage.  We were all alone that night and enjoyed the solitude of anchoring out.  The moorings at Vero Beach are terrific, but we have missed the freedom of anchoring out.

On April 8, 2017, we motored up the ICW from the Melbourne Bridge to Titusville.  We put the enclosure up in the cockpit to cut some of the wind chill, and that made our journey more pleasant.  The winds were light, and the sun was out.  But the day was excrutiatingly boring, as only a day on the ICW can be.

We caught a mooring at the Titusville Municipal Marina.  There are anchoring opportunities nearby, but the moorings are comfortably spaced and inexpensive ($19.26 with BoatUS discount).  We draw 5’ when heavily loaded with fuel and water, so we caught a mooring ball on the outside of the field on the river side where the water is deeper.

On April 9, 2017, we motored up the ICW from Titusville to Daytona Beach.  We continued our place in the parade of northbound boats, and at this point, I feel like we know many of them.  The weather was gorgeously sunny and a tad warmer.  The winds were light.

We had tons of wildlife sightings throughout the day, including dolphin that stuck their faces out of the water to peer up at the boat.  I know they aren’t really smiling at me, but it makes me laugh with pleasure anyway.  As we transited the Haulover Canal, I finally saw manatee.  That area is known for having a large manatee population, but I didn’t see any when we went through earlier this year.  It was exciting to see them, even though they were basically just brown blobs surfacing and then receding.

The Haulover Canal has a bascule bridge with one span permanently raised.  The canal is quite narrow and has been choked with motorboats each time we’ve been through.  This view of the boat in from of us gives you an idea of how little room there is to maneuver.

It seems that the ICW has two faces:  soul-crushingly boring or terrifyingly busy.  This day was the terrifying variety, as it was a weekend day with gorgeous weather.  The boat traffic was insane, particularly the damnable jet skis and the small motorboats driven by maroons, as Bugs Bunny would say.  It got manic in New Smyrna, and I had to give the five-blast airhorn warning on two separate occasions.

We had an anchorage picked out in Daytona Beach near the Seabreeze Bridge, but friends J and C on m/v Seamark were anchoring south of the (now defunct) Memorial Bridge.  Once they got there, they radioed us with depths and condition, and we decided to join them.  We anchored off of the red 44 in 11 feet of water.  There are some boats on moorings in that location, but there is room for anchored boats as well.  By the end of the night, there were eight or nine anchored boats, and it was a good anchorage for us.

On April 10, 2017, we motored up the ICW from Daytona Beach to St. Augustine.  It was another beautiful day, and we were again in a pack of northbound boats.  The current was kind to us, and once we got past the Matanzas Inlet, the current from the St. Augustine Inlet sucked us along.

This leg of the trip has a few problem shoaling areas, particularly where water from the Matanzas Inlet joins the ICW at mile marker 792.5.  There is a sharp turn with four green marks, and when we were going south, notes on Active Captain had us hugging the red side tightly, which feels like it puts you practically on shore.  We knew that there was dredging going on between mile markers 792 and 795, and we were worried that we’d have to dodge dredges through that narrow channel.

This is where the miracle of the cruising community comes in.  Other cruising sailboats were radioing conditions back to those of us that were behind them.  Fortunately, the dredges weren’t running on that day.  We ended up leading another sailboat, s/v Northern Goose, through that tricky spot as they draw 7 feet.  We were able to give them depths on our track as we went through, and that made their trip a little less hair-raising.

Everyone says it, but it’s true:  the cruising community is tight-knit and incredibly generous with help, encouragement, and information.  We’ve seen time and time again how cruisers help one another without hesitation and how quickly friendships are formed.  It’s a wonderful world to be in.

Fortunately we had made reservations for a mooring at the St. Augustine Municipal Marina, as the field was slam full when we arrived.  We got a ball mid-way down the south field, so our dinghy ride isn’t too long.  We’re too far out for a decent wifi connection, but hey, you can’t have everything.