We left St. Augustine on April 15 for a short trip to an anchorage off of Pine Island.  While it only took us a couple of hours to get there, we were treating it as an investment in the next day, which was to be long.

We had never been to this anchorage area before and were quite pleased with it.  It is easy off and on to the ICW, was calm and quiet, and had great holding.  There is a noticeable current running through the area, but despite the fact that the boat switched directions, we never really felt the current.  The anchorage is ringed by marsh grass and trees, and we saw many snowy egrets.

We anchored in 10.4 feet of water and shared the anchorage with three other boats by the time darkness fell.

On April 16, we left our anchorage at Pine Island and headed up the ICW to Fernandina Beach.  The Fernandina Harbor Marina took a real hit from Hurricane Matthew, but at this point in their repairs, they have 12 mooring balls available.  We called first thing in the morning to reserve a ball; the marina accepts same-day reservations only for the mooring balls.

We certainly had no shortage of stimulus as the day wore on.  First of all, it was Easter Sunday.  Second, it was a beautifully sunny day.  Third, it’s the ICW near heavily-populated areas.  Add those together, and you get ten million motorboats and jet skis flying up and down the channel at top speed.

This stretch of the ICW is bordered by interesting houses, some fancy, some not.  We saw two of our favorite statues at two different houses:  Ronald McDonald and The Hamburglar. 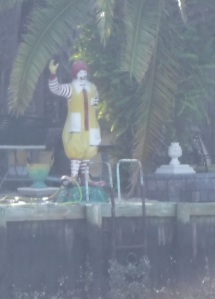 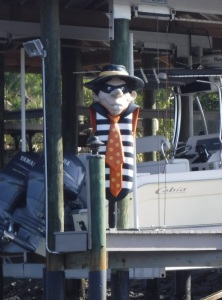 Why put those in your backyard? Who knows.  All I know is that I look for them and give thanks that there are wacky people like this left in the world.

Later we saw a homeowner standing on his dock, spraying down into the water with his garden hose.  It looked quite odd.  As we got closer, we could see that he was hosing down a manatee’s back.  The manatee then stuck his head out of the water so that the man could hose down his face.  This went on for minutes as we passed by.  It was too cute.  Spa day for the manatee, I guess.

We also saw dolphins all day.  The highlight for me was seeing a pod with a cow and calf.  There is nothing—and I do mean nothing—cuter than a dolphin baby.  I’m a sucker for puppies and foals, but dolphin calves are so cute they make me want to scream.

It was a great bird-watching day as well.  I saw my usuals:  osprey, brown pelicans, great egrets, snowy egrets, great blue herons, and laughing gulls.  But this day we also saw white pelicans and, for the first time, swallow tailed kites.  I get a kick out of identifying birds, but the gulls and terns are very difficult for me to discern.  I’m going to have to buy an identification book for them.

The only hairy part of the day was going under the San Pablo Atlantic Blvd. Bridge.  It’s a fixed bridge that is notorious for the fast current that runs beneath it, particularly at max flood.  I’ll give you one guess when we hit it.  The current was so strong beneath the bridge that there were standing waves, whitecaps and all.  We also had a 3.3 knot opposing current.  The Captain lined Kestrel up, murmured endearments to her, and in we went.  Now I know how clothes in a washing machine feel! We made it through rattled but unscathed and kept motoring up to the Fernandina Harbor Marina moorings.

The moorings were all full when we arrived, with the exception of one left for us.  Thank goodness we made a reservation! We hadn’t been to this field before.  It was certainly easy to navigate in and out of, but it is also right next to a large manufacturing plant of some sort.  The air smelled strongly of plywood; it wasn’t a gross smell, but it wasn’t great either.  But for a one-night stop, that field fit the bill.