We left Fernandina Beach on April 17, 2017.  The overnight offshore passage from Fernandina Beach to Beaufort couldn’t have been more different from the last one we undertook (Miami to Vero Beach).  The winds were very light (0-10 knots), the seas were low (1-2 foot waves), and the wave period was long.  That made for some comfy motorsailing with the main only.

It was wonderful and relaxing to be back offshore and out of the ICW madness.  There wasn’t much to see other than the hypnotic motion of the waves and the sun sparkling off of the water. 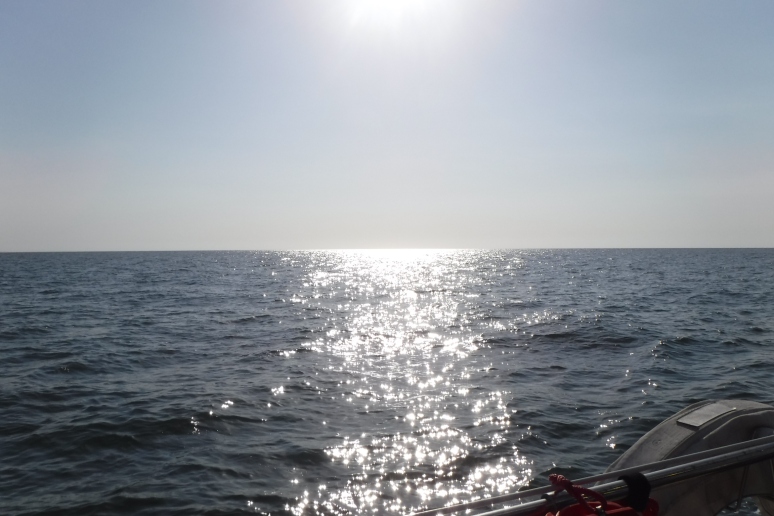 Before dark we put a reef in the main and rolled out the staysail.  We needed to slow down, so we cut the engine entirely and sailed for four or five hours.  Even with the light winds, we were going 3.5 to 4 knots; we must have been in some kind of favorable current, because we never would have speeds like that with such light winds.

While sailing offshore is more relaxing in many ways from travelling the ICW, there is still the press of a schedule, at least the way we are doing it in overnight hops.  If we were going multiple days, the schedule wouldn’t come into play as much.  Out of caution and prudence, we don’t like to enter inlets in the dark.  If we are making great speed offshore, sometimes we need to slow down so that we can hit the inlet at the right time.  This was such a case; we were going way under our normal speed so that we could hit Port Royal Inlet at first light.

I know I rave about night sailing, but there is something magical about silently cutting through the black waves, the hundreds of stars shining overhead, the moon rising bloody orange and then eventually setting bright white.  It’s like existing outside of time somehow.  When the sun finally rises, it’s like checking back into reality.

When we passed the Tybee Inlet near Savannah, we saw many huge container ships staging to enter the inlet.  Because we have AIS, we can get quite a bit of information about each ship (as they can about us).  The nice thing is that when we call them on the radio, they are always professional and treat us as equals even though their lifeboats are larger than our vessel.

We came back inshore at the Port Royal Inlet and took a slip at the Port Royal Landing Marina.  We hadn’t been in a marina in months, and the luxury of being able to just step off the boat onto a dock was dizzying.  And fresh water, all the fresh water we could want! The marina itself was everything we had hoped for.  The transient dock is a long face pier; it is floating concrete and looks brand new.  The showers and heads were spotless, the staff was exceptionally helpful, and there’s even a courtesy car. And did I mention the limitless fresh water? Oh, and the endless electricity because we could plug in at the dock? I think I turned every light on down below just because I could.

We borrowed the courtesy car to take our jerry cans to a gas station for filling.  The marina’s fuel dock is down due to hurricane damage.  We also went to a hardware store and ate lunch at Agave, a Mexican restaurant.  After some much needed showers, we took a nap (which was almost more needed than the showers).  We would come back to Port Royal Landing Marina in a heartbeat.

After an essentially 24-hour stay at Port Royal Landing Marina, we left at noon on April 19, 2017, to do another offshore leg, this time to Charleston.  It would have made more navigation sense to simply do a two-day offshore passage from Fernandina Beach to Charleston, but our marina reservation in Charleston didn’t begin until April 20.  We had a heck of a time getting the reservation at all, as it is concurrently Charleston Race Week and an in-water boat show.

The winds were freakishly light on this passage, averaging between 5 and 10 knots.  The seas ranged from glassy swells to maybe one foot.  We raised the main basically to act as an air brake to keep us from swinging back and forth in the swells, but that was all it was doing.  Before dark we put a reef in the main and rolled out the staysail.

Our overnight passage was uneventful weather-wise but jam-packed with other ships.  We were travelling through a busy shipping corridor, and the AIS was constantly lighting up with large cargo vessels.  There were also a number of large fishing boats out, some of which did not have AIS.  Fishing boats make me nervous because they are dragging large nets, and it’s important to stay away from those.  At night, depth perception is less reliable, so it’s a little nerve wracking.

Like our passage from Fernandina to Beaufort, the challenge lay not in maximizing speed but in making sure we would arrive at our destination at the right time.  It can be a complicated dance, and these were the parameters we had:

Given our total distance and those parameters, we calculated the speed we should travel.  Sounds easy.  Ahh, but there’s more.  We can raise a sail to make our ride more comfortable, but when you raise the sail, that increases speed.  Given the fluid (pardon the pun) nature of the wind and water, we are never travelling exactly at the “correct” speed.  So for the whole voyage we are constantly managing the boat’s speed.  It’s a challenge.  But when all was said and done, we arrived within five minutes of our target time and as the dockhand was driving up in his golf cart to assist.  Boom shaka laka!

Entering Charleston Harbor this time was a much different experience than when we entered it in mid-January.  That time the entire harbor was socked in with thick fog; this time it was crystal clear, and we got to see the city and its many sights. 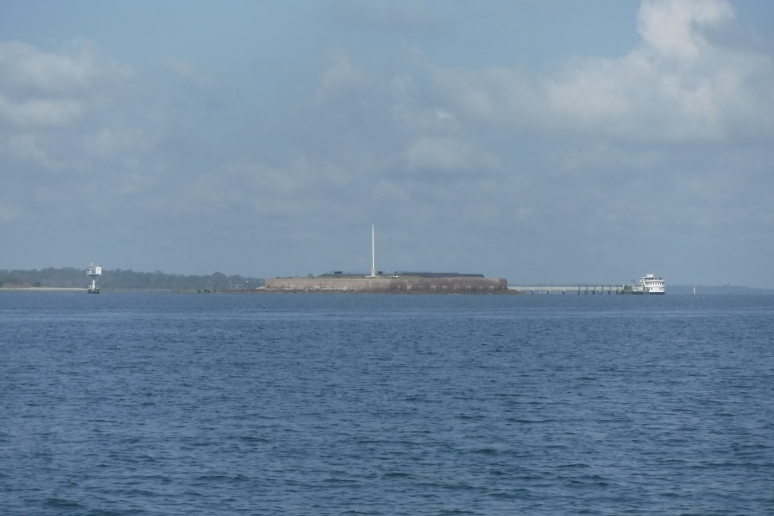 We took a spot at the Charleston City Marina megadock and are tucked underneath—literally—an enormous sailing vessel named Athena.  Her bowsprit covers probably 10 feet of our boat.  Kestrel isn’t a huge boat to start off with, but we feel positively puny now! We plan on staying in Charleston into next week to wait for a good weather window for our next offshore jump.