Over the last two+ weeks we’ve reached some large milestones and gotten some huge weather-dependent projects done.  It’s good to be over that hump and to not have to be so freaked out about whether or not it’s going to rain and ruin something important.

First and foremost, our new skeg and stern tube finally arrived from Island Packet.  Halle-fricking-lujah.  The stuffing box, shaft, and stern tube have all been installed; all that’s left is the prop and the skeg.  The yard is improving on how the skeg is attached to the keel and the rudder, so we’re happy about that.

We had a mechanic inspect and adjust the valves on our engine as well as remove and clean the heat exchanger core.  As he was doing that work, he noted that the raw water pump belt, which we had just replaced within the year, looked like it was sitting low in the pulley.  The belt looked perfectly fine from the outside, and we routinely inspect the belts.  Once removed, it was obvious that it had cracked almost all the way through.  And THAT’S why you have an expert inspect the important systems.  No raw water = overheated engine fusing into a big block = you get to buy a new one.

This is what the belt looks like in the pulley.  Please move along, nothing to see here, ma’am. 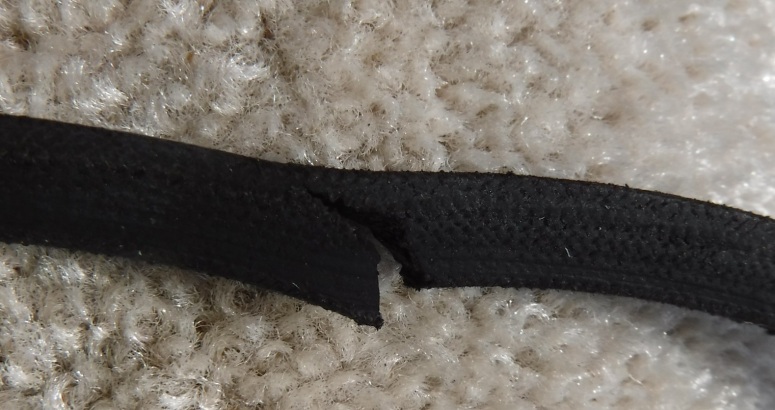 And here’s what it looks like once it was removed.  That’s a disaster waiting to happen right there.

The hull has gotten lots of TLC.  We put three coats of Collinite Fleetwax Paste on the hull, and now it’s mirror-shiny.  Since we hand wax, I feel like my right arm and shoulder muscles are about three sizes bigger than my left.

Doing our hull took about two and a half cans.

We also repainted the boot stripe with three coats of Brightside paint.  We’ve never painted anything on the hull before, and one of the yard guys whose specialty is fiberglass and hull finishes was so generous in giving us advice.  It made the job a lot less daunting.  The boot stripe isn’t big, but we didn’t want to do a poor job.

I repaired the cove stripe where it had gotten dinged; the cove stripe is the gold stripe that runs along the hull underneath the cap rail.  It’s essentially a roll of gold tape, so I cut out the marred sections and replaced them with new.

We completed putting Cetol on the caprail; we now have three coats of tint and two coats of gloss.  I did the same number of coats of Cetol on the companionway, which has been on my to-do list for oh, about five years now.  There’s never a good time to do it because we’re constantly going in and out, so we just gritted our teeth and have been as careful as we can.

Here’s what happens when you AREN’T careful.  See those three footprints? That’s where I stepped on Cetol Gloss that apparently hadn’t fully cured.  Sigh.  I had to scuff it out and then reapply Cetol over a larger area to fix that screw up.

The Captain completed the servicing and reassembly of the windlass.  That was one job that fought him every step of the way, from disassembly all the way through reassembly.  Sometimes a job is a slog from start to finish, and this was one of those.  It runs well, and we used it to reel all of our chain back into the chain locker.

The rigging, both standing and running, has been inspected, and the Captain inspected and lubricated all blocks.  We installed a new mainsail halyard, topping lift, and lazy jacks.  The Captain installed some eye straps and cleats on the boom to help with routing and securing various lines.

The Captain also installed what we call an exhaust flapper on the exhaust pipe.  It allows water to flow out of the engine unimpeded but will be forced shut if water (like following seas) hits the stern and tries to flow up the exhaust pipe.

At night and on rainy days we worked on splicing and sewing projects.  The Captain whipped and spliced lines and created Dyneema soft shackles.  I sewed Phifertex bags for spare lines, storm lines, chafe protection, and other miscellaneous items.  Although I put a label on each bag, we developed a color coding system for our bags that I think will work very well.  All of our lines are stored in the lazarette, and there are quite a few of them in what inevitably ends up as a big jumble.  Any way we can quickly differentiate between them is a help.  We decided to use tan for our everyday lines, yellow for our specialty lines, and red for our emergency lines.

We hope to be back in the water soon.  The weather has been, shall we say, uncomfortably warm.  But we’re getting there, and the jobs list is down to one page.  We are routinely mistaken for yard staff now by customers, and I take that as a compliment. 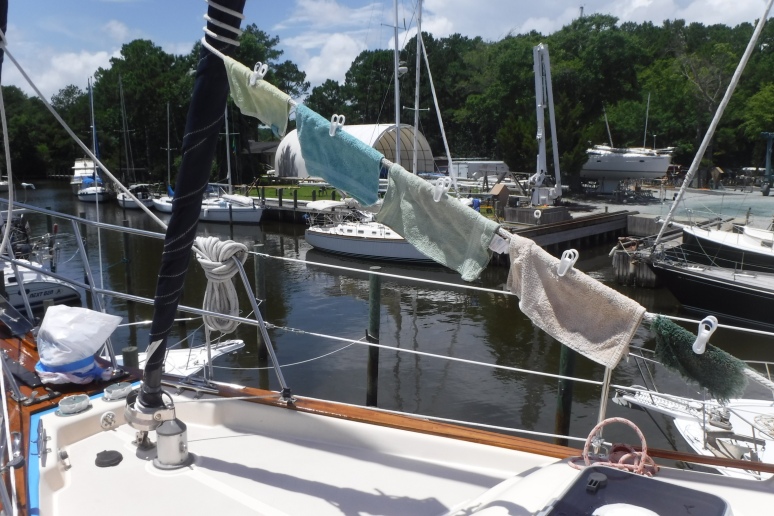 Some people have Tibetan prayer flags; we have Cruiser Prayer Rags.  They send out good will to other owners in the boatyard like, “The rain will hold off until your teak finish has cured,” and “You will find the screw that dropped down into the gravel,” and “There will be a Sharpie within reaching distance,” and “You will have the correct size drill bit,” and “Don’t worry, the milk in the cooler will still be good.”