We left St. Augustine on December 3rd bound ultimately for Ft. Pierce.  Between St. Aug and Ft. Pierce was our only stretch of ICW on this trip, and I couldn’t be happier about that.

December 3 saw us going from St. Augustine to an anchorage at Daytona Beach.  We made it through the historically treacherously shoal area around the Matanzas Inlet with no problems, primarily because we hit it at high tide.  Our luck held through the Crescent Beach Bascule Bridge, where we squeaked though the bridge just before a thick fog bank descended upon the area.  A fair current had us screaming along for most of the day.  We anchored in 8 feet of water at our usual anchorage in Daytona Beach, adjacent to the red 44 just south of Memorial Bridge.  This day was 8 1/4 hours for 47.2 nm/54.7 sm.

The usual view when travelling the ICW; we are like ducklings all following each other.

On December 4 we set off along the ICW to Titusville.  We paid for yesterday’s fair current by having a foul current for the majority of the day.

I’m happy to report that while many, ahem, rustic boats were cleared out by Hurricane Irma, Grill Guy is still around! We passed this boat this spring and were absolutely taken by his ingenuity.  Looks like he’s spruced up the boat a little, too.

The ravages of Hurricane Irma were evident on this stretch, as virtually every dock south of New Smyrna Beach was completely destroyed.  A highlight of the day was passing through the Haulover Canal; the manatees were out in force, and we must have seen 25 of them feeding, snoozing, and slowly swimming.  They are so gentle and charming, and I don’t get to see them up close as often as I’d like.  Titusville Municipal Marina is now down to 16 moorings thanks to Hurricane Irma, and they were all taken by the time we arrived.  We anchored in 11 feet of water south of the Max Brewer Bridge.  There is no tide in the area, and the holding was great.  This day was 8 ¾ hours for 41.7 nm/48.3 sm.

We saw quite a few barges with debris recovered from the waterway. 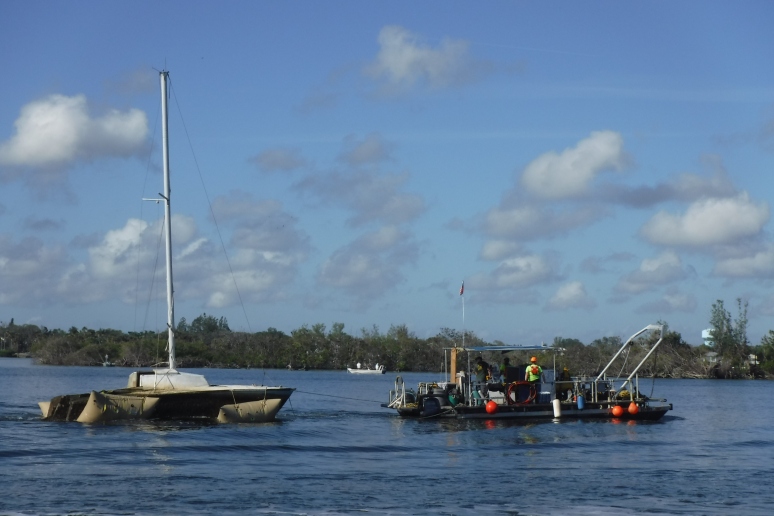 We also saw salvage operations for sunken vessels.  These guys attached float bags to this sunken catamaran, raised it, and are towing it away for disposal.

On December 5 we continued along the ICW to an anchorage in Melbourne.  We had another day of foul current but other than that, it was a pretty mellow day.  Boats moving south are out in force, and it’s kind of fun seeing the same sailboats every day.  The motor yachts leave us in their dust, of course.  Due to a south wind, we anchored in our usual spot in 10 feet of water north of the Melbourne Bridge.  As in Titusville, there’s no tide to speak of in that area, and the holding is great.  This day was 7 ¼ hours for 34.0 nm/39.2 sm.

We’ve been trying out a new (to us) anchor alarm app named Anchor.  It uses the GPS in our iPad to determine our location and sets off an alarm if we exceed a certain radius from the point where we dropped the anchor.  You can see how much the boat moves with the tides and currents overnight.

On December 6 we made it to Ft. Pierce (8 ¾ hours for 43.3 nm/49.8 sm).  We’ve gone in and out of the Ft. Pierce Inlet many times but never stayed in Ft. Pierce before.  This time we got reservations at the Ft. Pierce City Marina.  When we arrived at the marina’s entrance channel, it was on a strong ebb tide.  The marina’s entrance channel runs at almost a 90 degree angle to the Indian River, so we had to cross the current to get into the marina.  The cross current was absolutely vicious, and the Captain had to navigate us through a narrow entrance channel leading through huge piles of boulders and rip rap.  We have been in some dicey situations before, but that minute or two passing through the boulders was truly one of the most terrifying moments of our sailing life.  We were balanced on a knife edge, with success or disaster being equally possible.  But we made it.

The Ft. Pierce City Marina is super nice.  The transient dock is new, and it’s a floating concrete face dock.  The facilities are extremely clean, and the dockhands and office staff are helpful and funny.  There’s laundry (4 washers and dryers), a lounge with TV and full-sized fridge, showers (2 each), diesel and ethanol free gas, and a gift shop.  They can also receive mail and packages.  Marina guests get 20% off gift shop purchases and a one-time 20% off anything at the Tiki Bar, the on-site restaurant.  There’s wildlife galore, including dolphins, pelicans, cormorants, gulls, and grackles.  The mullet were about to spawn, and they were practically jumping out of the water they were so crazed; the hormones were so thick, it was like being in a high school cafeteria.

The marina is centrally located downtown, right next to the library.  Marina guests can also get a free library card.  There are tons of restaurants within walking distance, and the downtown area is really cute.  There is a great fishing pier right next to the marina for those with a Florida fishing license.

This theater looks small, but it actually encompasses the tall building behind it as well.  I wish we could have seen a performance there.  Maybe next time.

From a practical perspective, all within a mile-ish radius are a Publix, Staples, West Marine, multiple tackle shops, multiple pharmacies, a liquor store, Dollar Tree, and lots of other stores.  We rented a car for two days at Enterprise to take care of some provisioning and also to have some fun visiting specialty shops in other towns (Florida Freedivers and two quilt shops).

We also took care of two important needs for the Bahamas.  First, we had our interviews with Customs and Border Patrol for the Small Vessel Reporting Service.  Now that we’ve been vetted by them and assigned an identification number, we can reenter the United States from international boat travel by simply calling on the phone.  The alternative is to find a port of entry, raise the Quarantine flag, have me stay on the boat, and have the Captain find the nearest CBP office and check in personally.  Now we can avoid that hassle.

The second item was to have Mack Sails install a mast-mounted whisker pole.  When we are running downwind (e.g. with the wind behind us, pushing us), the genoa has a tendency to flog if we aren’t just on the right angle.  The whisker pole extends from the mast to the bottom corner of the genoa, poling it out and forcing it to stay extended.  Having it mounted on the mast means that theoretically it can be set by one person; since we are a two-handed crew, this was important to us.  Mack Sails sent two guys to install the pole, and they were very professional.  They had the job done within a couple of hours, and it looks great.  I’m excited to be able to use it.

We left Ft. Pierce on December 13 and did a 36-hour offshore leg to Rodriguez Key and then to Marathon.  I’ll post about that soon.  We will be spending the month in Marathon and heading to the Bahamas in January.

I’m still getting used to Christmas trees and palm trees.