When we were done having Mack Sails install our mast-mounted whisker pole in Ft. Pierce, we knew we had a little over a month before we planned to head to the Bahamas.  Where to go? Immediately we decided on Marathon.  We had such a great time there in the spring that we just knew we had to go back.

Hurricane Irma devastated the Keys in September, and Marathon was no exception.  Like so many other boaters, we were heartsick at the satellite images of sunken and pulverized boats, houses and businesses turned to rubble, and mangroves littered with debris.  We had been keeping up with reports on Marathon’s progress since that time, and we knew that we could offer two things if we came down:  a helping hand and tourist dollars.  Honestly, the latter is what places like this need. 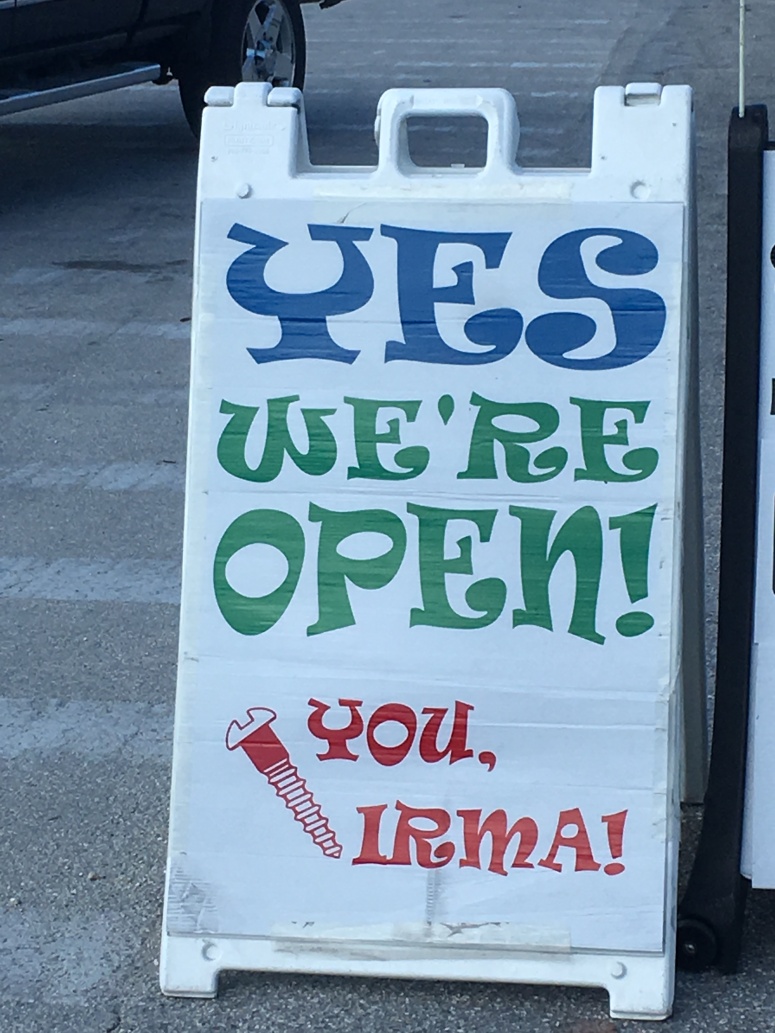 This may well be the new Marathon motto.  It’s been hard for businesses to find enough staff as so much housing was destroyed.

I am happy to say that in an amazingly short period, Marathon has sprung back.  Most businesses that we see have reopened.  Yes, there are piles of debris on the side of the road that are awaiting pickup.  Yes, there are (now) vacant lots that need to be cleaned up.  But in general, this place has had a miraculous recovery, and I think it’s all attributable to the “Keys Strong” mentality.

Near Burdine’s there is a boat destruction area.  Recovered boats are being brought there any way possible–by tow, by barge, whatever–and then broken down.  See the pile of masts to the right?

Most importantly for us, the Marathon City Marina’s mooring field is in full swing.  There are fewer mooring balls (I heard about 200 down from 226), but all of the marina’s services to renters are available except for wifi.  For wifi, there is the library, which is a short walk away.  The dinghy dock hasn’t been rebuilt, but dinghies are being put where boats used to dock in front of the office.  Except for those two issues, all of the usual amenities have been restored:  water, showers and heads, laundry facilities, garbage and recycling, pump outs, bicycles, mail and package receipt, work rooms, the common area, book exchange, and the list goes on. 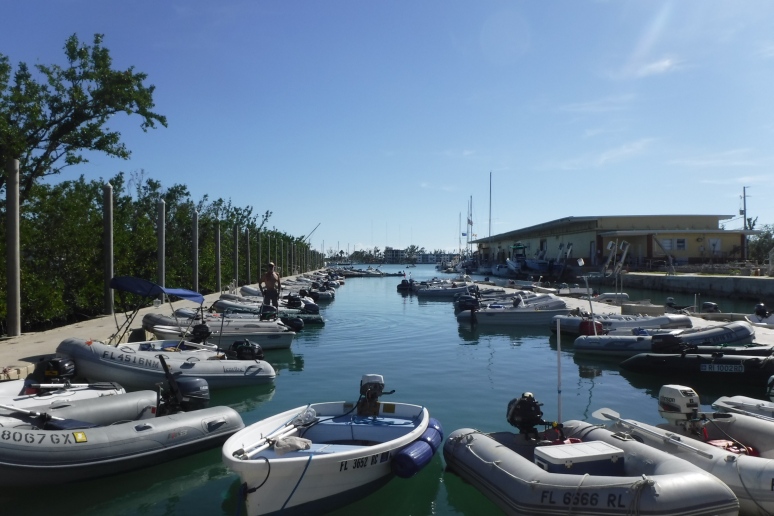 The temporary dinghy dock, full of dinghies before Christmas dinner.  The building to the right houses the office, laundry room, showers, common area, and work rooms.

When we were here in the spring, we had to anchor out as the mooring balls were full with a waiting list.  We were thrilled to be able to catch a ball when we came down in December.  This mooring field is unique in that you must live aboard your vessel to be eligible to stay here; there is no wet storage.  So (at least theoretically) every boat here has someone aboard, and usually that someone either lives here full time or comes for a season.

That results in a mooring field and associated city-run anchorage that is every bit like being in a neighborhood.  Each morning at 9 AM, there is a cruisers’ net on the VHF.  The net controller of the day asks for new boats who want to introduce themselves, asks for departing boats to say goodbye if they wish, and then runs several sections where we all get to chime in:  announcements, questions/comments/need help, buy/sell/trade, and trivia.  The net can last an hour if people are feeling chatty, and it’s amazing how quickly you get to know your neighbors.

There are many “neighborhood” activities like senior softball (women over 40 and men over 50—for God’s sake, we’re seniors!), yoga, and potluck brunches.  Residents restored the destroyed organic community garden, and it looks amazing.  The Seven Seas Cruising Association has a weekly lunch meeting.  There’s also a Facebook page (Boot Key Harbor Cruisers) where people can post questions, comments, pictures, and whatever else. 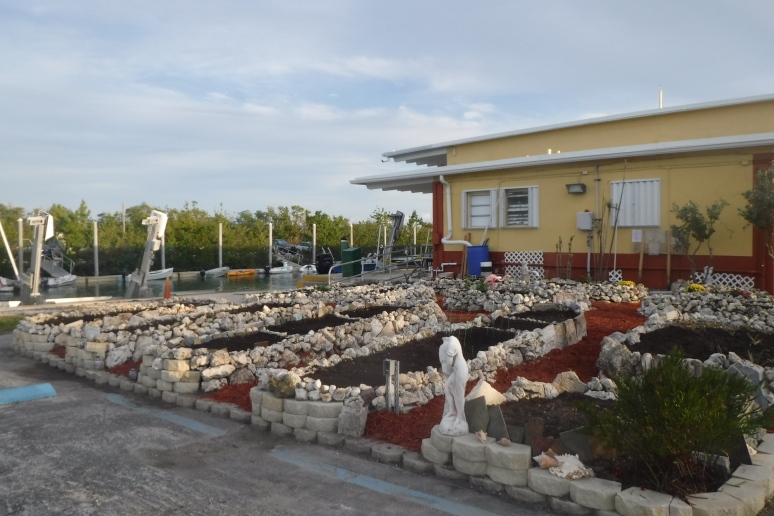 Volunteers did an amazing job of rebuilding the community garden.  It had been completely destroyed.  It has been newly replanted with vegetable plants, herbs, medicinal plants, and native fruit trees.

Boaters generally don’t hesitate to help each other, and that sentiment is magnified here because the people who need help are our friends and neighbors.  Some people row their dinghies to the dock, and we’ve towed quite a few folks who just needed a break (it’s hot here!).  People loan each other tools and machinery and help each other fix every type of boat problem under the sun.

I hate to go on and on, but there’s something special here.

But on to news.  Christmas was quite an extravaganza.  On the night of December 23, marina staff dressed up in Santa hats, put tons of lights on the pump out boat, and went through the mooring field offering each boat spiked or plain eggnog.  It was totally unexpected and utterly charming.  On Christmas morning, a boat with more Santa-hatted people went through the mooring field offering homemade mango rum (which was fantastic if mouth-blisteringly strong).  On Christmas afternoon, we attended the potluck in the common room.  There were well over a hundred people, and the food tables were absolutely groaning with both traditional and exotic choices.  There are people here from all over the world, and the menu reflected that.  We had a Christmas tree and live music, and it was just great.

New Years Eve was also a hoot.  We actually managed to make it until midnight for the first time in years and watched the fireworks displays going off all around us from a variety of celebrations.  We had folks blowing conch shells and those little paper horns, people shooting off aerial flares, and just general good-natured mayhem for about 10 minutes.  Then it settled down, and we conked out.