Going from Spanish Wells, Eleuthera, to Little Harbour, Abaco, was going to take too long to accomplish in daylight, so we decided to do it in an overnight trip and arrive in the morning.  After the challenging trips we had been having, we sure felt due for an easy one, and apparently Mother Nature agreed.  We had about a whopping 6 inch swell with crazy light winds (2-7 knots) on the beam, which allowed for a very low-stress motorsail all night.  It was a new moon, so it was totally dark with no horizon; the stars and planets were spread out across the sky like a blanket.  It was so calm and quiet that it was like travelling in outer space.  The trip was 68.8 nm and took 15 ¼ hours.

We were heading for an anchorage off of the west side of Lynyard Cay, which is slightly northeast of Little Harbour.  When we arrived at our anchorage, there was a mix of eleven motor yachts, catamarans, and sailboats already there.  The bottom was a combination of sand and heavy, patchy grass, and it took us a bit of motoring around to find a suitably sandy spot in which to drop the anchor.  While our Rocna 25 anchor is a beast, it’s bad form to anchor in thick grass that can interfere with a good set.

Like so many other towns and islands here, the history of the settlement on Little Harbour is incredibly interesting.  In 1950, a Canadian professor named Randolph Johnston got sick of the rat race.  He headed south on his schooner, Langosta, with his wife, Margot, their daughter, Marina, and three sons, Bill, Pete, and Denny.  They came ashore in Little Harbour in 1952, and there wasn’t a soul there.  They temporarily settled in some caves, built a thatched hut, and eventually built their house and bronze foundry.

I’m not sure if this is “the cave,” but there are a number of caves ringing Little Harbour. 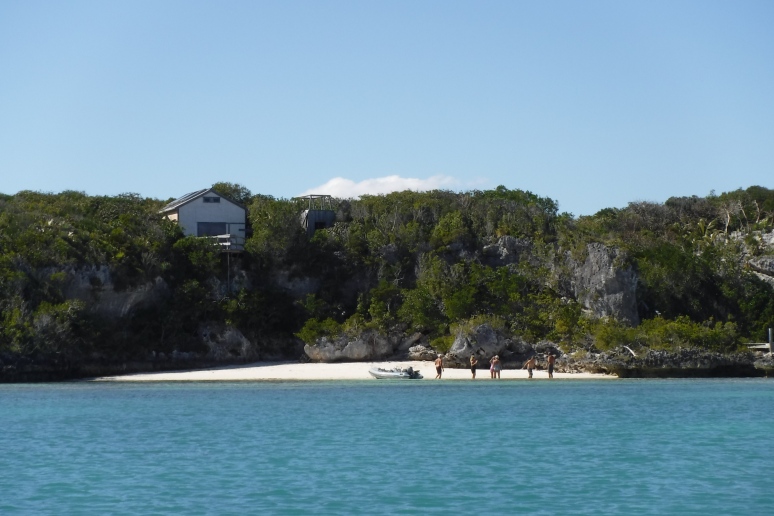 Next to the caves are beautiful white sand beaches.

Randolph Johnston wrote an illustrated book about their experience called Artist on His Island: A Study in Self Reliance.  Pete Johnston, one of Randolph’s sons, is the owner of Pete’s Pub and Gallery, located in the same harbor.  Pete’s is home to the only working bronze foundry in the Bahamas, and the gallery showcases Pete’s sculptures as well as other artists’ works.  In addition to the Pub and Gallery, Pete’s has rental cottages, a small mooring field, and offshore fishing trips.

After a rejuvenating nap, we dinghied into Little Harbour and up to Pete’s Pub and Gallery.

Houses perch at the top of towering cliffs as you enter Little Harbour. 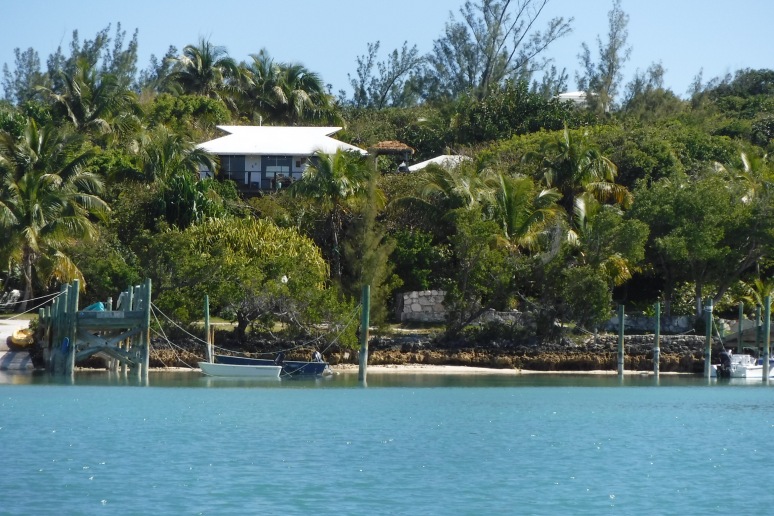 The island is incredibly lush.

By total accident we stumbled upon Pete’s famous St. Patrick’s Day party, and the place was a madhouse.  DJ Emerge was playing loud (but good) music, and people were wearing a wearing green Mardi Gras beads, and, in some cases, much more elaborate green-themed costumes.  On our way in, we saw s/v ‘Bout Time on a mooring in the tiny mooring field.  We last saw D & J the day we all left on the Bimini to Nassau trip.  And as these things always seem to go, we had an impromptu dinghy meet up in the middle of the harbor.  It was great seeing them again.

We beached the dinghy in front of the pub and waded into the crowd.  We hadn’t been around that many people in quite a while, and it was a little disorienting at first.  We started in the gallery and admired all of the beautiful works of art.  The sculptures are primarily birds and sea creatures, and there are naturalist paintings and other works of art as well.  We ended up buying two small sculptures of a manta ray and of a shark, both mounted on driftwood.

This is the beach in front of Pete’s, looking out on the small mooring field.  Our faithful dinghy awaited our return.

Having done our part to support the arts, we went to the Pub and celebrated with two Blasters, the rum punches for which Pete’s is famous.  While not lushes by any means, we intend to have a Rum Punch Faceoff throughout the Abaco, and Pete’s Blaster was the first entry.  It was pretty amazing.  After that we had lunch and had a grand time people-watching. 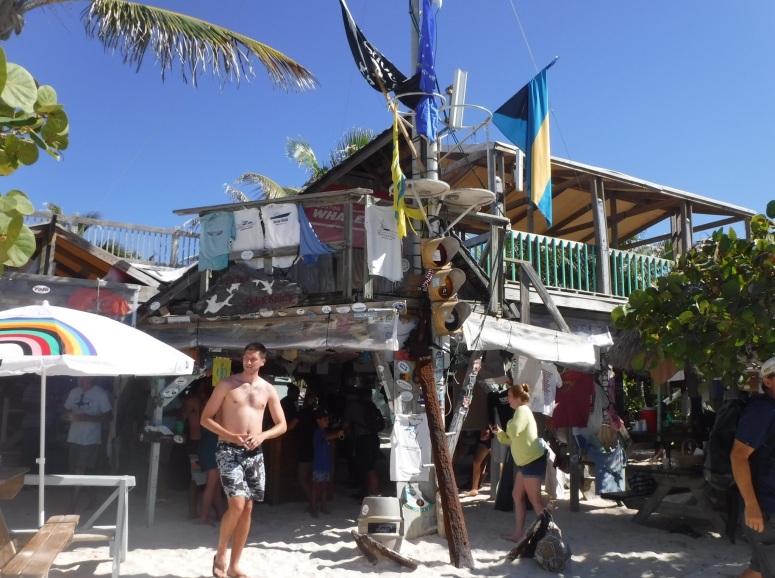 The entrance to the Pub, which is entirely outdoor (or at least wall-less).

Many bars allow patrons to write on their walls with markers.  Pete’s encourages t-shirts and stickers.  The posts and ceilings of every building were festooned with t-shirts stapled in place.

The Pub is a grouping of connected buildings with seating and tables.

On the way back to the boat, we were amazed at the number of sea turtles swimming around the mooring field and harbor.  You can spot them by looking for their little shiny heads popping up briefly for air.  They were everywhere, and it was the coolest thing.  I never got a picture as they were too fast.

We ended up staying the next day as well but didn’t come back ashore.  The jump from Eleuthera to Abaco was our last big leg until we head back to the US, so from then on, it would just be day hops.  Our next destination:  an anchorage off of Boat Harbour, south of Marsh Harbour, to wait out a nasty cold front.