When we left Marsh Harbour, we headed a short distance east to an anchorage off of Hope Town on Elbow Cay.  Our friends R and D on s/v Scheherazade recommended a particular spot that was between two busier anchorages, and we were quite pleased with it.  We anchored in 11 feet of water, and even though the bottom was grassy, the anchor held well.  The 9.46 nm trip took 2 hours, 15 minutes.

Hope Town is a popular place, as evidenced by the packed moorings and anchorages.  There are also tons of rental houses and hotels, so the combination of “boat people” and “airplane people” results in a town bustling with tourists. 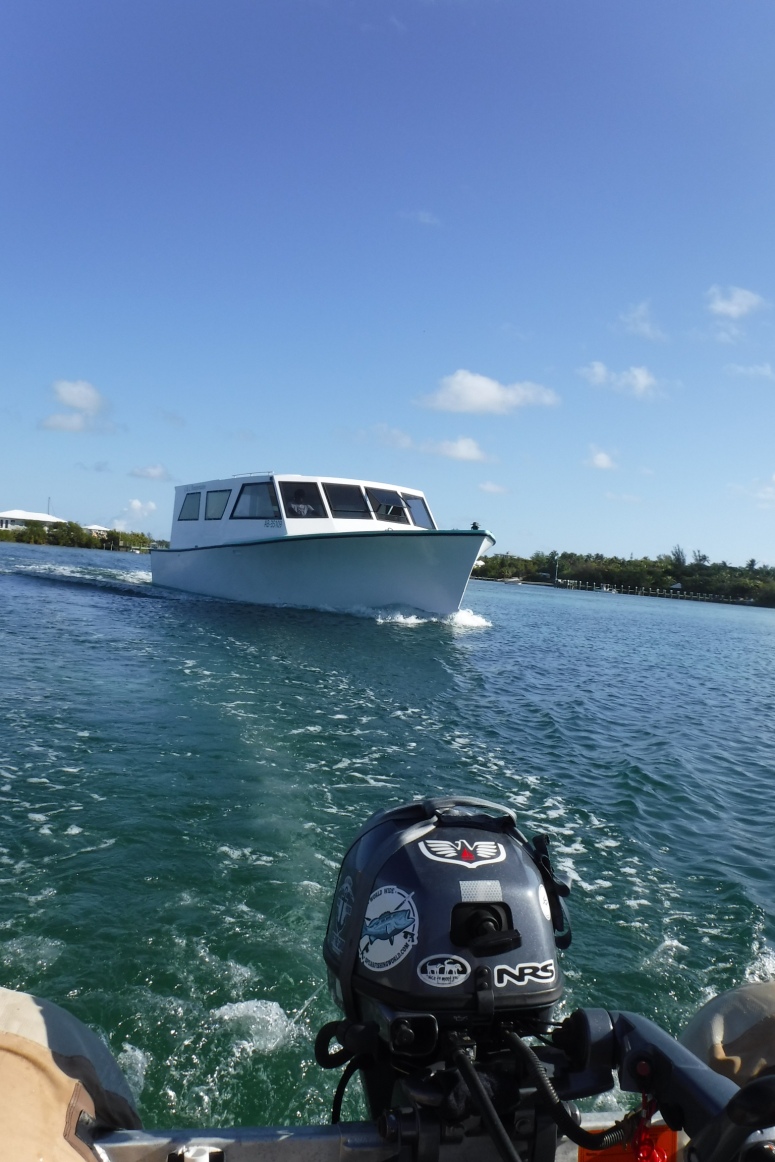 As we dinghied in to Hope Town’s harbor, the ferry was eating us up–that guy was in a hurry.  The ferry runs regularly between Marsh Harbour and Hope Town, and it also serves as the school bus for Hope Town’s children, many of whom go to school in Marsh Harbour.

Although geographically small and with a tiny population, Hope Town caters to tourists with clean roads, tidy homes, lush greenery, and plenty of places to spend money.  Interestingly, all buildings must comply with “Bahamanian architecture” requirements set by Town Planning, much like a homeowner’s association demands architectural uniformity.

The Post Office, Police Station, and Commissioner’s office in the center of town also adhere to the “cute architecture” plan.

The defining feature in Hope Town is the Elbow Reef Lighthouse, the last lighthouse in the world that is manually powered and fueled by kerosene.  It was built in 1863 despite the protest of “wreckers,” people who made their living by scavenging the many shipwrecks dotting Abaco.  The light’s lens and turning equipment were made in the 1900s and still work today.  When the Bahamian government decided to automate its lighthouses in in 1966, the Lighthouse Preservation Society convinced the government to let them continue the light’s manual operation.  The lightkeeper hand pumps the kerosene, which is then pressurized and sprayed onto a mantle (made by Coleman).  And every two hours, the lightkeeper hand cranks the weights that keep the lens turning.  It’s an amazing feat of machinery. 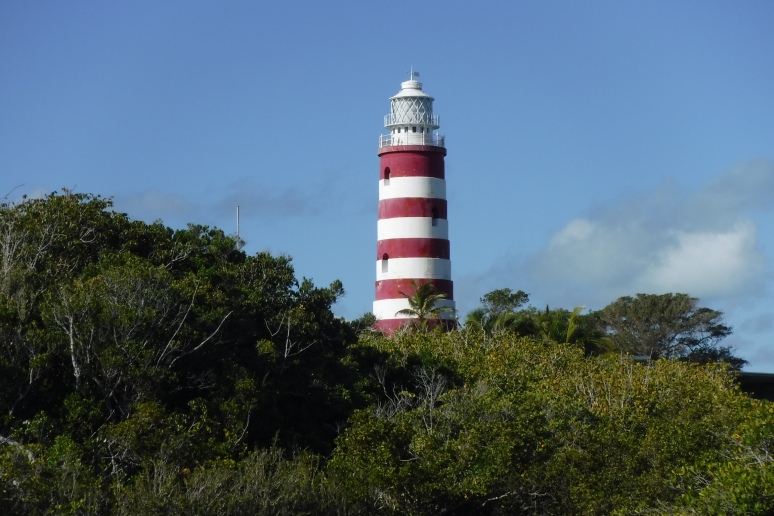 A view of the lighthouse from outside the harbor. 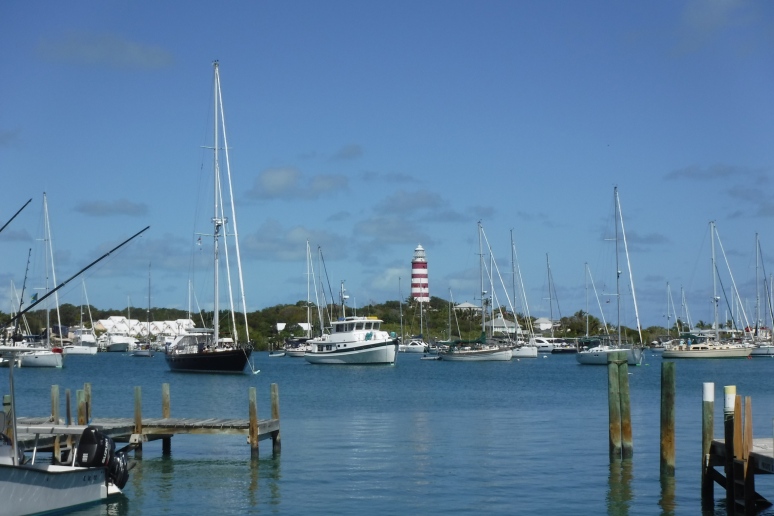 A view of the lighthouse from across the jam-packed harbor.

We tied the dinghy to the dinghy dock conveniently located in front of the lighthouse and wandered the grounds.  The light keeper lives on site, as do a number of inquisitive hens and a particularly loud rooster.  Entering the lighthouse is free, but we put a donation in the box in gratitude for the chance to visit such an interesting place.  We were the only ones there at the time, but a quick glance at the guestbook shows that the lighthouse is an extremely popular place to visit.  We climbed the 101 spiraling steps to the top and crawled through a tiny door to the outside balcony.  The views of the harbor and town are spectacular at the top, which is 89 feet up, and examining all of the vintage machinery on the lighthouse interior was fun. 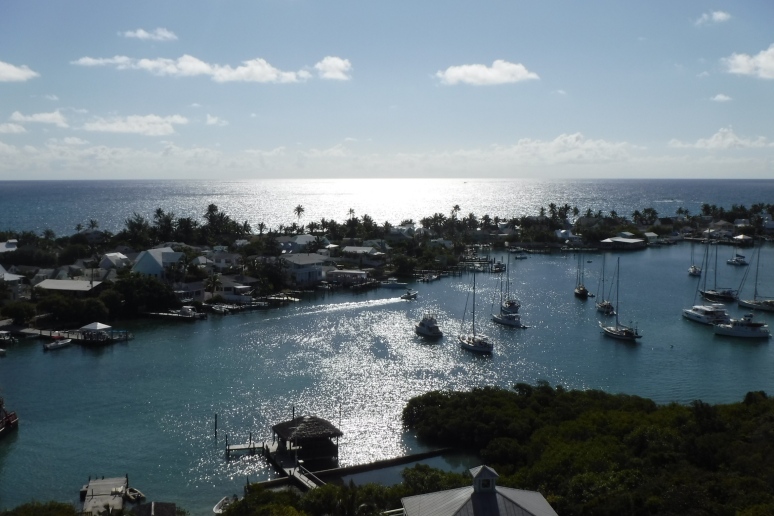 The views from the top of the lighthouse were amazing.  Below is part of Hope Town’s harbor and the ocean.  There’s our dinghy in the lower left corner of the picture, tied to the dock.

We strolled through town and admired the many beautiful homes.  Most yards are bordered with white picket fences and full of bushes bursting with flowers. 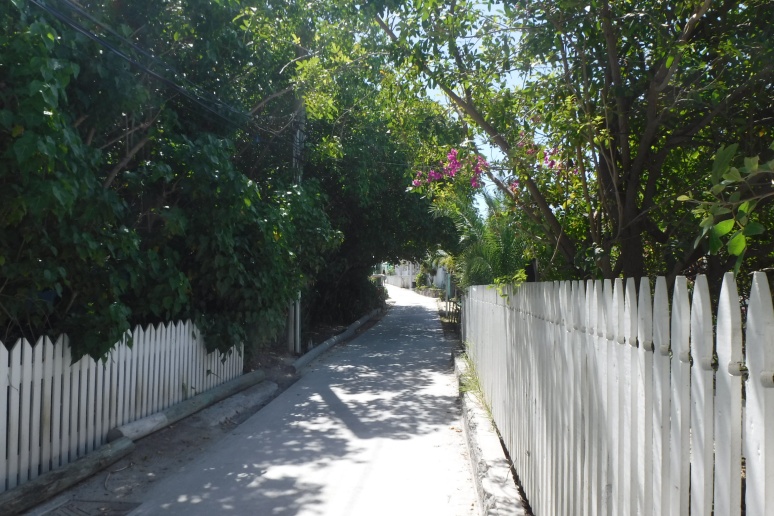 Vehicular traffic in Hope Town is mostly golf carts and some cars, and the narrow roads make driving a constant game of Chicken.

The whole place looked like a postcard, and I can see why it would be popular with visitors.  We stopped at Hope Town Coffee for some goodies and to look at the many artworks for sale. 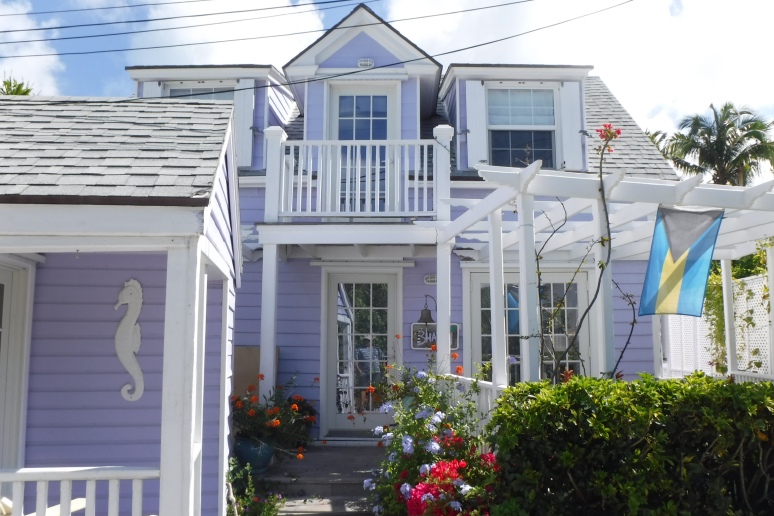 Lots aren’t big, and many of the homes have tiny yards and pocket gardens. 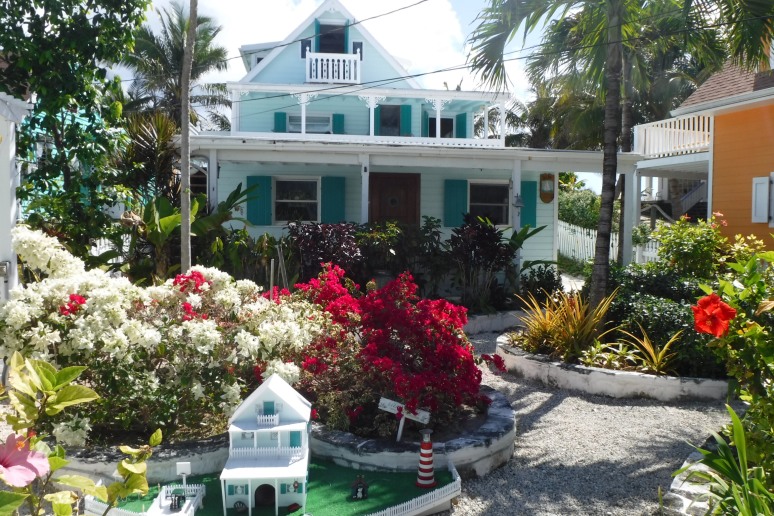 This home has an exact replica of the “real” house, made for lizards.  See the foreground? It has a lighthouse, astroturf grass, and everything.

The highlight of Hope Town, though, was Vernon’s Grocery Store.  It is a small store selling a wide variety of groceries, but the standouts are the fresh-baked goods.  Vernon bakes a variety of breads and rolls in the bakery attached to the grocery store, and to call him a character is the understatement of the century.

Vernon, Baker Extraordinaire and All Around Good Guy.

He is a man who is comfortable in his skin and has a ready smile.  We loved talking with him and bought a couple of loaves of excellent bread.

Vernon hard at work while he chatted with us.  I can’t express how good the bakery smelled, all yeasty and buttery.

We poked our heads in the ubiquitous t-shirt shops, and I found a great shirt benefiting Bahamian potcakes.  Potcakes are a type of (generally stray) dog endemic to the Bahamas, generally a medium-sized mutt with smooth hair, cocked ears, and long faces.  They are called potcakes because historically they were fed the hardened “pancake” at the bottom of a pot of reheated peas and rice.  In the late 1970s, they were recognized as a breed by the Bahamian government and are officially called Royal Bahamian Potcakes.   Since most of the t-shirts I wear are from animal rescue organizations, I was thrilled to add to my wardrobe with such a unique twist. 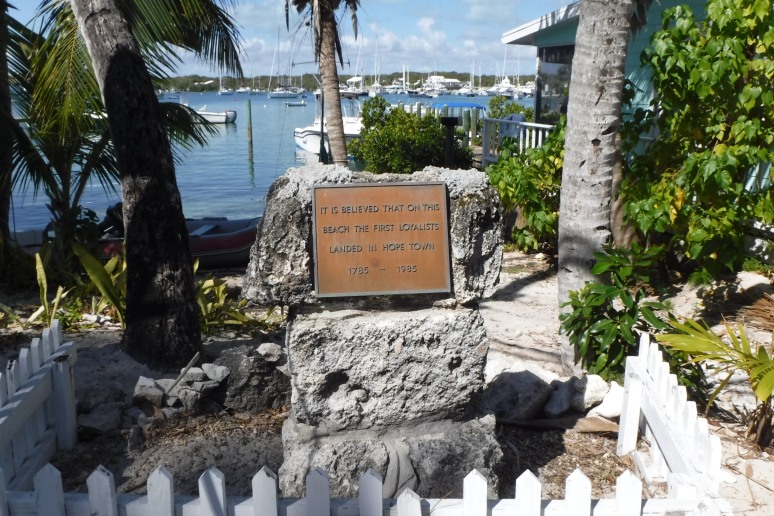 Like so many Bahamian settlements, Hope Town was populated by Loyalists who fled the United States.  History is important here. 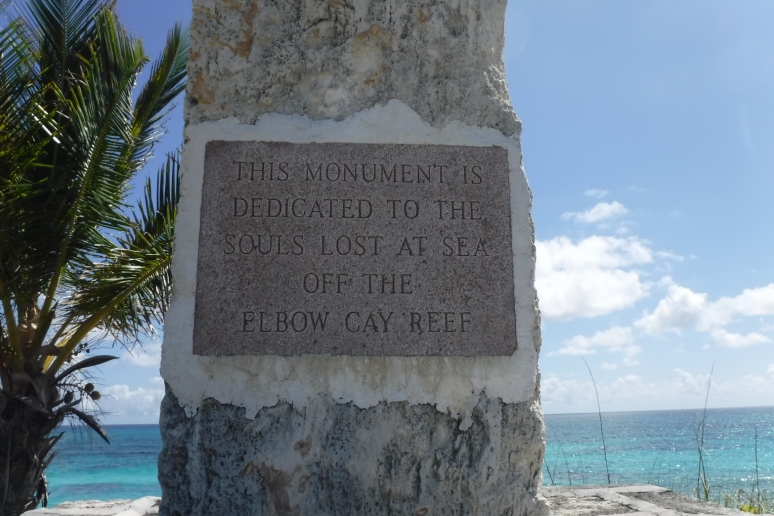 This monument was simple, graceful, and lovely.