We were eager to leave Great Guana Cay, and our next destination was Green Turtle Cay to the northwest.  Getting to Green Turtle is a little more complicated than the hops between other Abaco islands.  The water is too shallow to stay south of the islands and in the sea of Abaco.  Instead, you must divert out into the Atlantic Ocean when going around Whale Cay and then cut back into the Sea of Abaco.  This is known as Whale Cay Passage, or more colloquially, “The Whale.”

Most of the time, The Whale is not a big deal.  But depending on the weather and sea state, The Whale can have “rage” conditions, which is the turbulent offspring of wind opposing current in a relatively narrow cut with strong tidal flow.  We’ve learned in our travels to take rough water seriously and so planned accordingly.  Being rage-averse, we left early in the morning in order to take advantage of tides and avoid some incoming weather, and the whole Whale passage turned out to be a non-event for us.  My favorite kind of event! People who left later in the day did not have as easy a time as us, that’s for sure.

We motorsailed 15.3 nm over 3.25 hours and anchored in 10 feet of water off of Joyless Point on Green Turtle Cay.  Most boats were anchored off of Black Sound to the south, which is where New Plymouth is located, so we and our four neighbors had plenty of room.

Our dear friends M and N on m/v Boundless have a wealth of first hand knowledge about the Abacos, and they had highly recommended Green Turtle Cay.  After Great Guana Cay’s letdown, we were sorely hoping that they were right.  This was probably going to be the last island in our Bahamas tour, and we really wanted to end on a high note.  Holy cow, did we ever.

We started our Green Turtle Cay adventure by dinghying over to Green Turtle Club, a beautiful and posh marina on the north side of the island in White Sound.  They have a free dinghy dock, and we strolled the beautiful, pristine grounds.  We stopped in to their cozy bar to have what turned out to be our favorite entry in the Rum Punch Face Off:  the Tipsy Turtle.

The hands-down winner of the Rum Punch Face Off:  the Tipsy Turtle.

The bar reminded me of an English pub, a dim oasis from the sun outside and full of comfortable furniture.  Oh, and papered with $1 bills from thousands of patrons.  The Green Turtle Club was one of the most elegant marinas we’ve seen on this trip, and I wouldn’t hesitate to stay there. 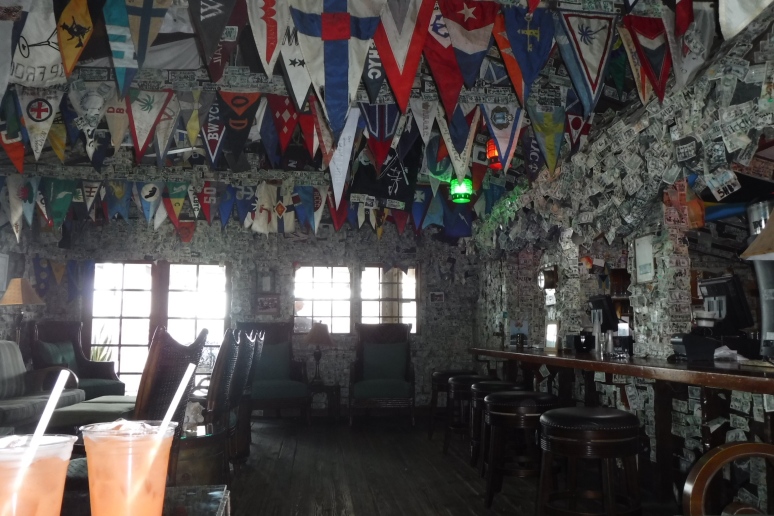 Get the feeling there’s been a few guests here? We left our autographed $1 bill stapled under the bar.  There was no way I was going to stand on a table to reach the ceiling!

We later dinghied down to Black Sound into New Plymouth.  We left the dinghy at the free government dinghy dock and explored the cute downtown.  It was the mix of small shops and pastel colored houses that we’ve become accustomed to on the smaller cays we’ve visited. 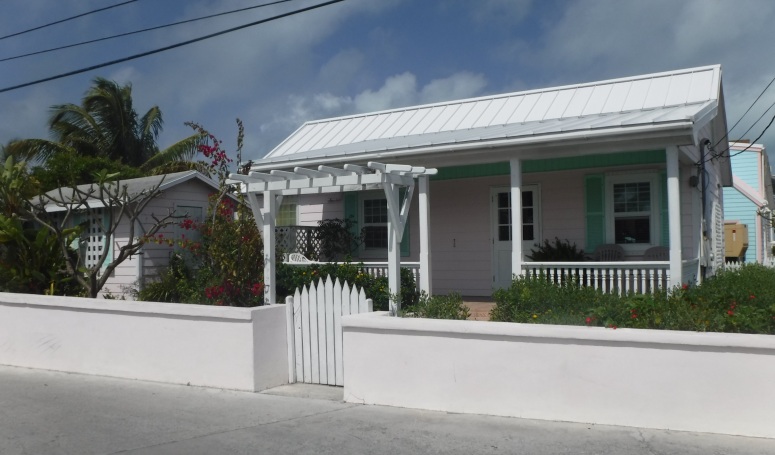 The town is full of tidy homes in gentle pastel shades.

The supplies boat was in, and this caused a flurry of activity and excitement.  Various shop owners and bystanders were collected at the dock, eagerly watching the freight being unloaded.  This was a boon for us, too, because it meant that the grocery stores were getting in fresh vegetables.

Boat day is always exciting.  It appeared to be carrying food, drinks, and fuel cannisters.

Here is “the old gaol.”  Who wouldn’t want a pink jail?

We stopped at the Loyalist Sculpture Memorial Garden, an attractive installation that has 24 busts of Loyalists and their slaves who made an impact on the settlement of the Abacos after the American Revolution.   It was interesting reading the plaque in the garden explaining how these people were vilified by their neighbors in America, stripped of their lands and holdings, and essentially on the run for their lives when they settled in the Bahamas.  That’s a perspective that I certainly was never taught in school, and it was another example of how history is written by the victors.

The Memorial Garden is well kept and has very artful sculptures.

For its size, we were surprised at how many grocery stores and bakeries New Plymouth supported.  There were three well-stocked and rather large grocery stores and at least as many bakeries and stores that offered baked goods.  We had to visit all of the bakeries, of course, and got a combined total of white bread, coconut bread, a beef empanada, cake slices, and doughnuts from McIntosh Bakery and Restaurant and from Papa Pete’s Bakery and Takeaway. 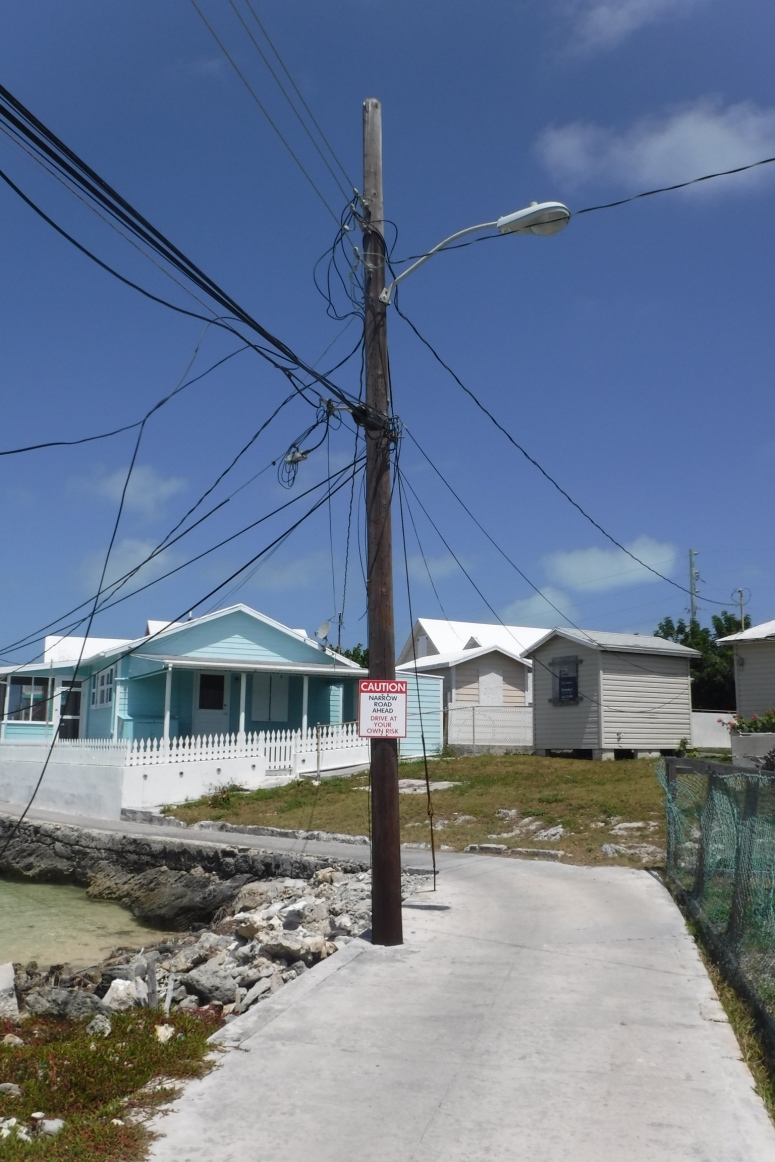 There are frequent power outages in the Bahamas.  Look at this hot mess, and it all makes sense.

And this wouldn’t be a post of mine if I didn’t discuss lunch.  We had a wonderful lunch at 2 Shorty’s Takeaway, which was sort off the main path.  You order at the window and then eat outdoors, and it was incredible—and incredibly cheap.  We started with a dozen conch fritters for $6; I then had a conch burger and huge portion of fries ($10), and the Captain had the $5 lunch special that included a BBQ ribs, peas and rice, and a square of macaroni and cheese.  We were so full when it was all over that we were in pain.  But it hurt so good . . . 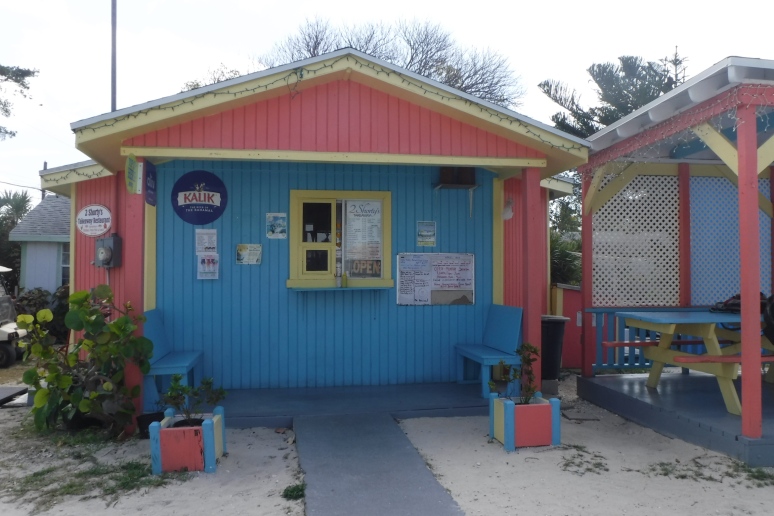 2 Shorty’s Takeaway, the scene of our culinary debauchery.

One of the highlights of the trip was an unexpected kindness from Mertie in Sid’s Grocery.  We have absolutely fallen in love with Bahamanian macaroni and cheese, and I was asking Mertie, the cashier in Sid’s, what ingredients she puts in hers.  She explained it to me, and I mentioned that we’d be back later after having lunch and walking around some more.  At the end of our day, we stopped in for fresh vegetables, and Mertie presented me with her recipe, written out on an envelope.  I was so touched at her gesture.  What a lovely woman.

From a cruiser’s perspective, New Plymouth and Green Turtle Cay “get it.”  In Black Sound, there are at least three free dinghy docks:  the government dock under the “Welcome to Historic New Plymouth” sign, in front of Curry’s Grocery, and directly in front of the anchorage.  There are two huge dumpsters for dumping trash for free.  One is on the government dock, and one is down towards Curry’s Grocery Store.

It’s tough putting my finger on what made Green Turtle Cay so special.  There’s been other islands as clean, as pretty, as quaint, and as cruiser-friendly.  There’s been other islands that have the things we need as well as the things we want.  But there is an ineffable quality to the people of Green Turtle Cay, and the Captain and I agree that it was by far our favorite stop in the Bahamas.

This is someone’s backyard patio and pretty much sums up the open and inviting atmosphere on Green Turtle Cay.