I’m not ashamed to say that I get a kick out of grammatical humor and the absurd; mix those together, and I’m in heaven.  I realize this makes me a giant dork, but I’m not ashamed of that, either.  The beauty of being tickled by word usage is that signs become an endless source of humor for me.  Here were my favorite signs that we came across in the Bahamas. 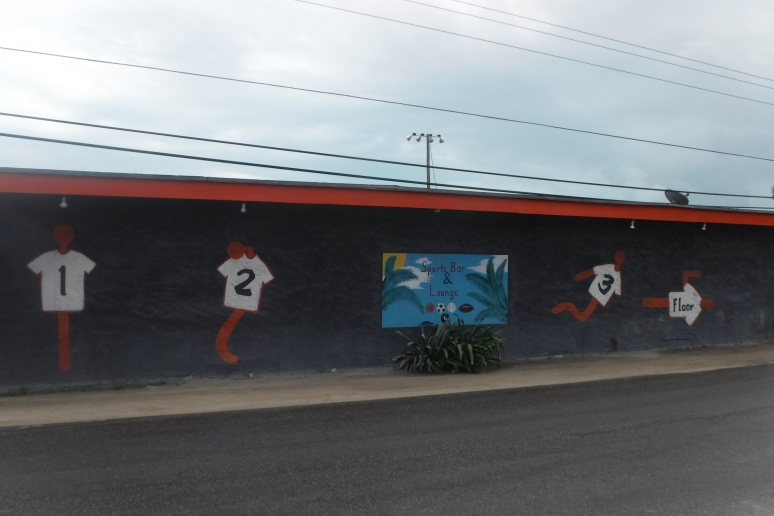 We’ll start with the 1, 2, 3, Floor Sports Bar and Lounge in Bimini.  Their sign takes up the entire side of the building and neatly sums up the progression of a night of poor impulse control.

This take-out restaurant was also on Bimini.  What do they have, you ask? Why, dinners, snacks, sandwiches, and fettucine.  Because fettucine is its own category of meal.  That’s an idea that those of us on the all-carb diet can get behind.

This liquor store on Bimini is actually a two-fer.  First you have the sign listing some rather unusual taboos:  wetness (apparently that did not include sweat, because I was always sweaty) and sands (I guess one grain was okay, but more than one was a no-no).

The second sign was only posted on–you guessed it–the day the supply boat came in.  The first copy is pretty eye-catching and pithy, but I guess adding the second copy really drives the point home.  If you’re anything like me, you hear “BOAT DAY” intoned in the voice of legendary drag-race announcer Jan Gabriel with his famous “Sunday, Sunday, Sunday!” 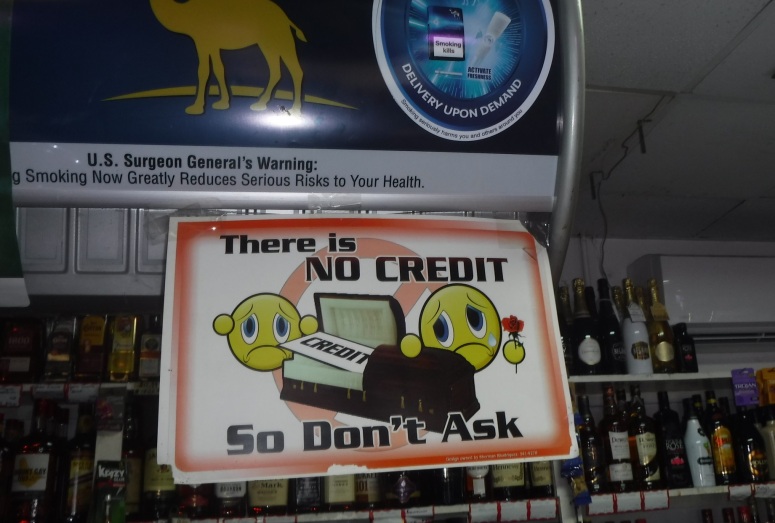 This liquor store in Nassau wanted to emphasize that there’s no credit extended.  Like, for real.  Ever.  To anyone.  Even Wimpy from Popeye.  Credit is dead, bro, and even sad emojis with flowers won’t bring it back.

Many stores in the smaller communities served a variety of needs.  This one was no exception.

This one is my absolute favorite.  It’s on Spanish Wells and alerts visitors of two very real dangers:  paking (sic) over the cess pit and the “big dog inside.” I bet nobody tries to sell Avon to this house!

Budda’s Bar on Spanish Wells wants to make sure that all tabs are paid.  I was just thrilled to see “you’re” punctuated correctly for once. 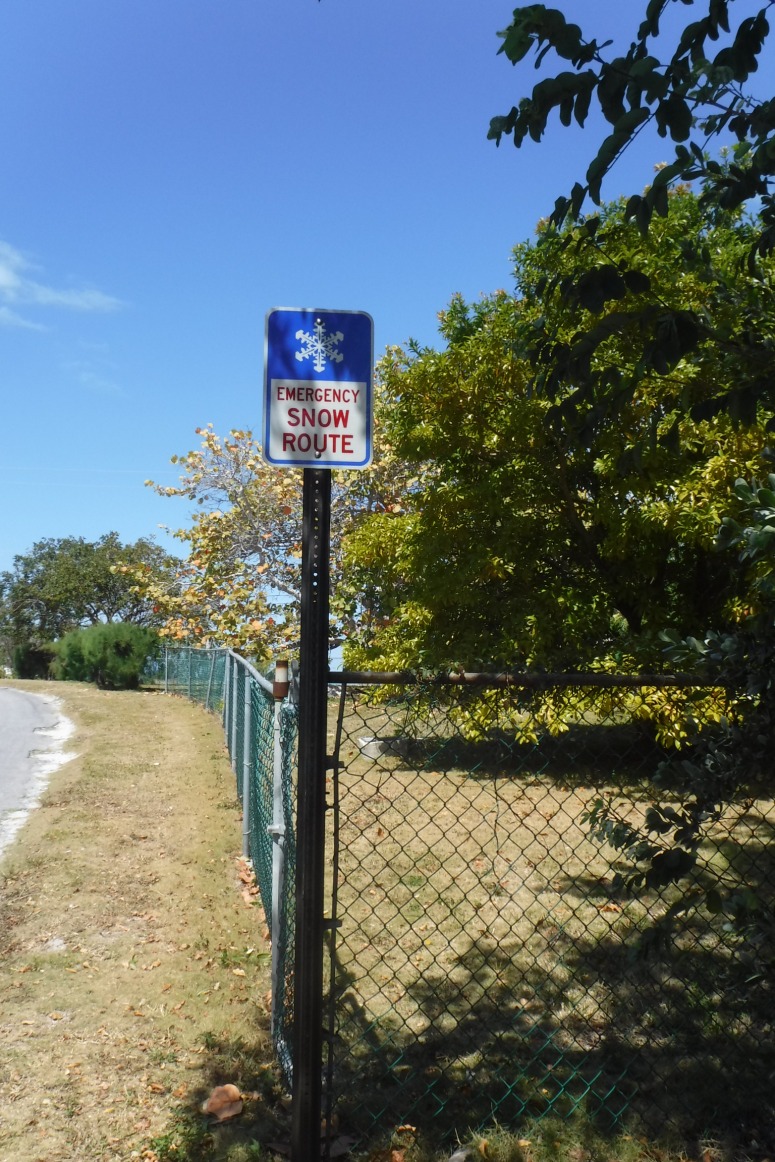 This was at the top of pretty much the only big hill in Marsh Harbour.  I asked our cab driver if it had ever snowed there, and he laughed long and hard.  But they are ready!

It was tough to pick just one sign from Vernon’s Grocery in Hopetown; the entire store was papered with them.  I think this one is a true pearl of wisdom. 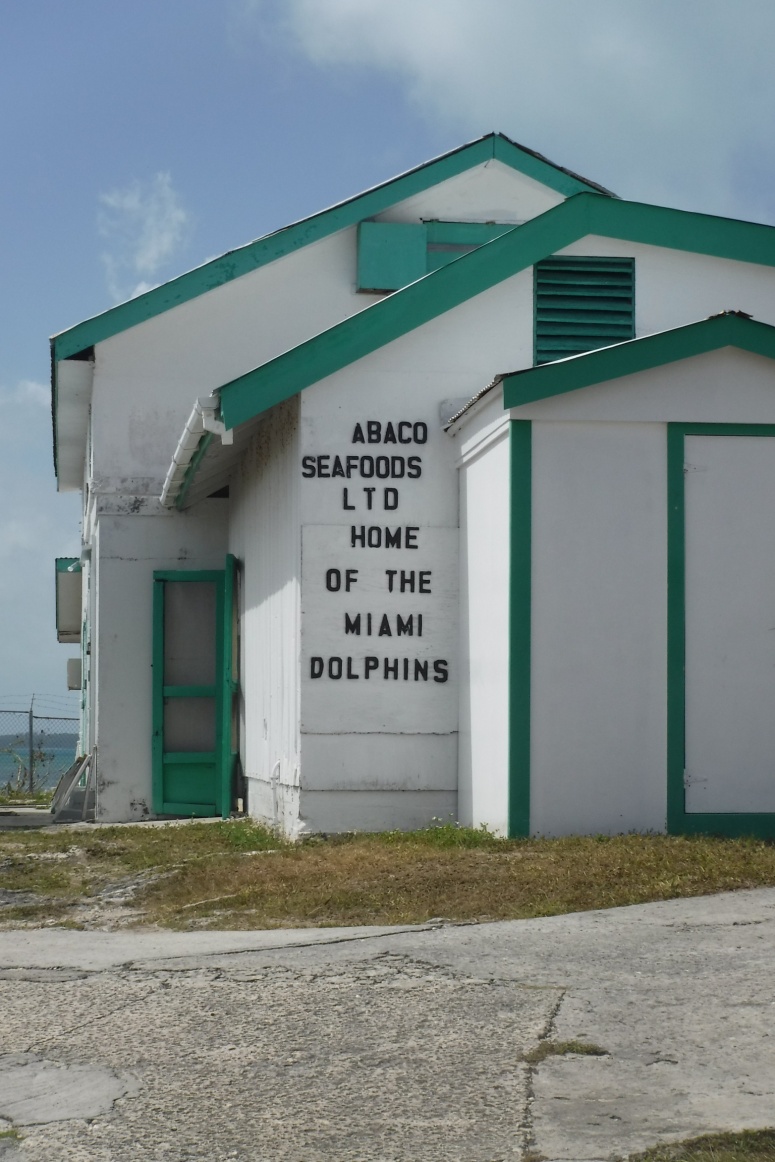 This sign on Green Turtle Cay was funny even to one as hopelessly sports-challenged as I am.  Hahaha, see what they did there? Dolphins and dolphins.