The bilge of a boat is kind of like the outdoor storage closet we had in our house; it was a necessary space that housed important things like the fuse box, but that didn’t mean that we made more than a desultory effort to keep the cobwebs and grit at bay.  Usually the bulk of our bilge is hidden by the water and fuel tanks, and since those are out, we decided to do some serious cleaning and sprucing up. 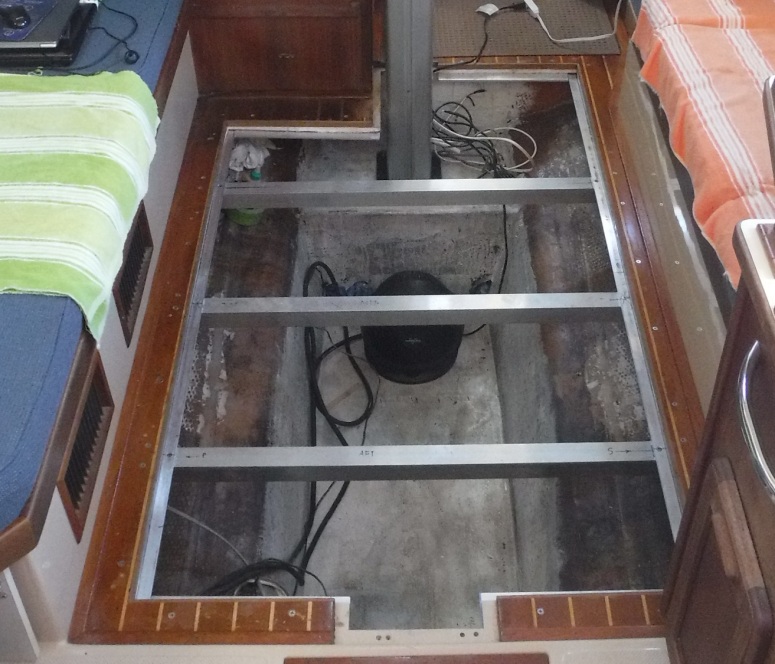 The bilge, before.  It wasn’t hideous, but it needed work.

The first order of business was to clean the mast step, a flat area around where the mast meets the keel.  It was crusted over with 29 years of god-knows-what.  Once cleaned, we discovered the penny that had been placed under the mast step when Kestrel was constructed.  It is tradition when a boat is constructed and the mast first stepped to place a coin under the mast step for good luck.  We put the penny back once the area was cleaned because who are we to break with tradition?

In days of yore, it was a gold coin.  Now it’s a scabrous penny.  But hey, luck is luck.

We then moved on to the bilge itself.  The bilge is raw fiberglass, and it’s not smooth.  It wasn’t filthy, but it’s inevitable that mud from the anchor chain and anchor locker will make its way down there and get stuck in the nooks and creases.  First we scrubbed with Simple Green and stiff brushes, wiped up the dirty cleaner, and then carefully rinsed with a hose.

The second step was painting the bilge with one coat of Sea Hawk Tuff Stuff.  It is an epoxy primer that we used when repainting our boot stripe, and because it’s oil and water resistant, it is a good bilge coating.  Then while I was at work, the Captain followed up with two coats of Interlux Bilgekote. The key to all of the painting was to do it on pretty days; the fumes were quite strong, and it was critical to let the boat air and have fans running.  The bilge is now a glossy grey, and it looks fantastic.

Our mast is keel-stepped, meaning that the mast goes through the deck and interior living space and down into the keel.  The wiring for all mast-mounted electronics goes through the mast and then out through a hole just below our cabin sole.  It was a big jumbly mess connected with a crusty old connector, so the Captain sorted everything out, put the wires on a terminal block, mounted the terminal block to a piece of starboard, and mounted the starboard to the forward wall of the bilge.  Now the wires are secure, easily identified, and easier to get to. 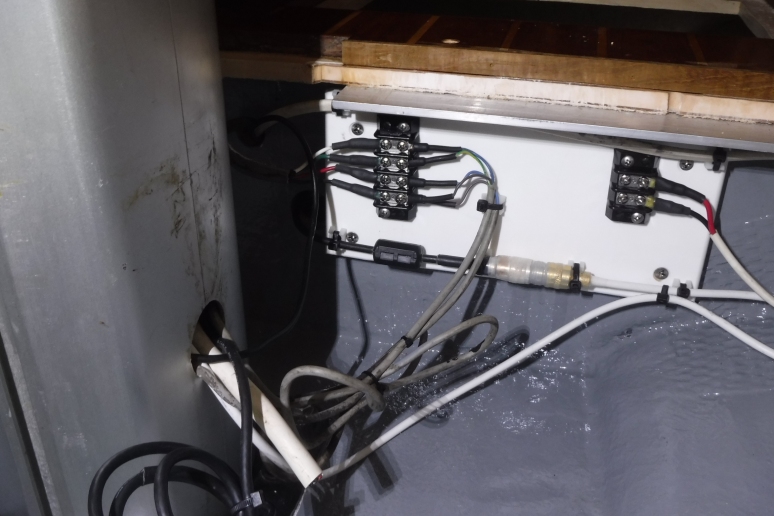 Our fuel tank just arrived a couple of days ago, and we are very pleased with how robust it looks.  We’re going to wait to have it installed until the water tanks come in; better to have one major disruption than two large disruptions.  Our water tanks have been ordered, so we’re just waiting on those.  Now that the bilge is clean and shiny and the wires neatly routed, there’s one less item on the to-do list.

The bilge in all its glory.  The windlass cable now runs along the top port edge of the bilge and dives down into a hole to continue traveling forward.  The cables in the mast are neat and under control.  We replaced the shower drain hose, which is the white hose running along the bottom of the bilge.  The mast step is junk-free, and the shine off of the paint can blind you on a sunny day.